Exceptional Agüero is the master of unexceptional goals 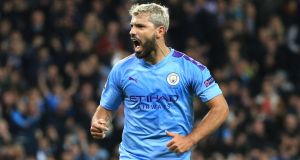 Some goals are bigger than others, as a Mancunian almost sang. But it’s true, you know.

The thought returned on Tuesday night as Sergio Agüero scored one of those goals of his from five yards, making it seem so simple, a formality, an inevitability. Like a postman delivering a letter; a job, Agüero’s job.

As he does most of the time, Agüero celebrated in the manner of his goal – low-key, no fuss – and when the discussion comes around as to why the Argentinian receives less praise and less official recognition of his talent than others, this is surely one of a handful of reasons that lead to a general explanation. Agüero is content to be a footballer, not a brand. His goal celebrations are not part of self-celebration. Even the QPR goal was about the team.

Yet Tuesday’s first was not a low-key goal. Manchester City were losing 1-0 at home to Atalanta in the Champions League. Pep Guardiola’s players will not have been rocked by this, and it was always likely to be a temporary situation given the disparity in the sides, but even so, City were trailing. Agüero’s goal, his first of two in four minutes, was the equaliser.

It changed the night – victors’ first goals do. Agüero has scored a lot of those in what is his ninth season at the club. The first is always more important and more difficult than stroking in a fourth or fifth – although Agüero has done plenty of that as well.

When his first was followed by a second from the penalty spot City had recovered their composure and had a lead they would extend. They have three wins in three games in Group C, and are close to assured of a knock-out presence come February.

Given Sterling produced a second-half hat-trick against the Italians, he took the headlines and the applause. Agüero did not look too bothered. But here lies another reason why Agüero is not given due credit: the players around him.

When Sterling has not been the centre of acclaim, it has been Kevin de Bruyne or David Silva or Bernardo Silva or Ederson or Vincent Kompany or, going back, Yaya Toure. City have had no shortage of players worthy of attention.

So despite City winning four Premier League titles in his eight seasons in Manchester, and accumulating 172 league goals in 247 appearances – not all of which were starts – Agüero has famously never been named Footballer of the Year in England, nor Players’ Player of the Year.

Robin van Persie (Arsenal 2012), then Gareth Bale (Tottenham), Luis Suarez (Liverpool), Eden Hazard (Chelsea), Jamie Vardy (Leicester), N’Golo Kante (Chelsea), Mo Salah (Liverpool) and Sterling (City) have all been deemed to have been ahead of Agüero in any given season.

The players’ award differed only twice – Riyad Mahrez being chosen ahead of team-mate Vardy and Virgil van Dijk named ahead of Sterling last season. So there is some consistency in selection. It could be argued that cumulatively Agüero surely merits an award, but then all the above were and are consistent.

Another piece of the reasoning is that the City players mentioned, plus many others, have made Agüero’s goalscoring task different to a striker in a weaker team. All those tap-ins, so-called.

On top of that, this is the modern Manchester City – richer than many countries and not afraid to prove it. Agüero cost £35 million, which sounds routine, but it was a City – and Manchester – record. Economic logic says City should be winning the Champions League and they have not, and Agüero missed that penalty away at Tottenham last season.

He scored eight times in his first six games this season, and when Guardiola was asked to comment on Agüero’s ability following his brace at Bournemouth in August – Agüero got the first again – the manager struggled to find something new to say.

“Yeah, as always,” Guardiola replied, “it’s not the first time he has scored goals, honestly.”

The remark was in keeping with the general perception that Agüero’s brilliance is somehow ordinary brilliance.

Perhaps Argentina’s comparative under-achievement feeds into the downplaying of Agüero. It is hardly his fault.

No less than Lionel Messi wrote the foreword to Agüero’s 2015 autobiography. Messi sounds sincere and impressed. But there is no nugget like Roberto Mancini’s comment that Agüero was a “photocopy of Romario”.

The book went under the radar, which is appropriate, because it is where Agüero operates until he is suddenly bleeping smack bang in the middle of it.

Those two Atalanta defenders “marking” him as Sterling lined up his 34th minute cross on Tuesday probably thought they had Agüero on their radar. He was behind and in between them and they were two yards apart.

As Sterling shaped to cross those two defenders must have felt they had their angles covered. But when the ball arrived on the edge of the six-yard box, neither got to it, nor did the advancing goalkeeper. It was Agüero who met the ball. Not only that, he supplied a deft touch to take it under the keeper and in.

The goal was a combination of vision, intelligence, speed, movement and touch. It was exceptional. But, because it was Agüero, it was unexceptional. Just another one of his small big goals.

Back in July on Tottenham’s summer tour, Dele Alli said a few words in Shanghai concerning his form and fitness last season. He had suffered hamstring, hand and thigh injuries and missed three months.

Alli was still there on some of the big nights – Ajax away, for example, the final in Madrid – but there was an undercurrent of “disappointment”, he said. “I’ve got to make sure that doesn’t happen again,” he said of injuries.

What he and we need to remember is that Alli was 22 for most of last season. He is 23 now; he is not old but this is his fifth Tottenham season. There is plenty of time for him to recover the vim he has shown.

But Tottenham’s stuttering start has seen Alli again a bystander. He has completed only two 90 minutes.

That one of them was last Saturday, when Alli scored his first goal since January, following it with 80 minutes on Tuesday against Red Star Belgrade, suggests a paced return.

It might need quickening. His goal against Fulham in January was part of Tottenham’s last away win in the Premier League, and they are at Liverpool on Sunday and then at Goodison Park next Saturday. Spurs could do with another Alli statement.