Eden Hazard: ‘I sent a text to José Mourinho to say I was sorry’ 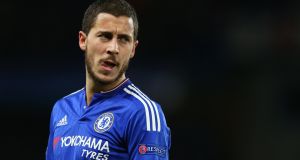 The text message was sent in the aftermath of a parting of the ways, and it was meant as an apology. Eden Hazard had been receiving treatment for that infamous hip injury on the day José Mourinho’s second spell as Chelsea manager was curtailed back in December, the Belgian still absent a few days later as Stamford Bridge’s collective grief gave way to fury aimed at an underachieving team and a board whose patience had snapped.

The buzzwords in the stands were “snake” and “rat”, echoed soundbites of the departed’s heightened paranoia over the last months of his tenure. Hazard was neither of those. Nor was he entirely blameless.

The word is not volunteered, but the suggestion is that text had Hazard admitting he felt ashamed of his own efforts.

“I sent him the message to say I was sorry he had gone and . . . well . . . just that I was sorry,” says the Belgian. “We’d enjoyed all that success together last season, but this time round we hadn’t. I felt a little bit guilty because I’d been player of the year. I’d been one of the most decisive players, and this year I’d performed less well.

“I hadn’t been at the same level. So I sent that text to José and he came back to me, wishing me all the best for the future. For a team of champions to go through what we have this year even I can’t explain. Things have been better recently, but we’re still not winning games quite as we used to. No one can put his finger on what’s happened at Chelsea.”

So much about the champions’ title defence has been baffling. The team’s form had flummoxed Mourinho as, too often, perennial winners were reduced to broken men.

Hazard, refreshingly honest when he reflects on a campaign of anticlimax, came to personify their toils. The irrepressible force who had illuminated a title pursuit, breathing life into a flagging side as they staggered towards the finish line, has endured the first prolonged lull of a nine-year senior career.

There have been niggling injuries and missed opportunities, fluffed penalties and shots cannoning back from the woodwork to leave even him smiling ruefully at just how brutally his luck had turned.

Social media timelines were littered with memes reminding followers what life had been like back on May 3rd, 2015, “when Hazard last scored for Chelsea”. The numbers, once a rolling tally of assists, goals and trophies, had become rather more sinister: 30 fruitless games, 273 days and 2,357 minutes stuck on his Chelsea tally of 49.

Then, last Sunday, Darren Potter clumsily sent the 25-year-old sprawling in the MK Dons’ penalty area and Chelsea’s number 10 stroked in the resultant spot-kick. His previous goal had claimed his club the Premier League title and prompted an outpouring of joyous relief after a plod of a run-in.

At Stadium MK, where FA Cup progress had already felt assured, the visitors’ outfield players mobbed him in such a frenzy of delight that the celebrations told their own story.

Hazard, his corner hopefully turned, can only offer theories as to why his form had stagnated at club level while he continued to thrive for Belgium.

“I’d played some very good games, at Manchester United, at Tottenham Hotspur, but they’d lacked a goal. There’ve been times when I could have scored myself, but I’ve played a pass to a team-mate instead. It never became an obsession for me to score at all costs. I’ve always said that I’m not a big scorer, I’m a worker. But you can’t escape you’ve not scored and it’s already January, so last Sunday was a bit of a relief.

“I don’t think my morale was down, but it plays on your mind a bit. Everything went so well in the past. This year, not so much. But you have to tell yourself that football is like that. I’ve had more ups than downs in my career. All you can do is keep working. You still have to take enjoyment out of what you’re doing and things will turn, and my smile has always been there. In good moments and bad. I’m somebody who can laugh even at myself. That happens now and again, when I’ve made a mess of really simple things. I say to the other guys in the dressingroom: ‘Bloody hell, did you see what I did then?’”

Didier Drogba, who had become a mentor last season when the pair were club-mates, was readily available to offer advice and support from his new base in Montreal.

“He’s always backed me,” says Hazard. “I’m not sure whether he’d ever experienced periods like that in his career, but I’ve always considered him a bit like a big brother. He’s there for me, whether it’s a text message or a phone call, and he’s helped raise my spirits. But I’ve never doubted myself.

“This is the first time this has happened to me, but it was always going to happen at some stage. You have to learn from it. I’m a human being, not a machine. I’ve been a professional since I was 16, so maybe that has had an influence too.”

By the time Hazard turned 25 last month he had already played 446 senior games for clubs and country. Lionel Messi had 431 to his name at that age, and Cristiano Ronaldo 407. When the Belgian limped off with a groin strain at Crystal Palace four days before his birthday, he had mustered 186 appearances in three years. His workload has been onerous.

There is also the theory that the accolades thrust upon him for last year’s blistering performances had weighed unexpectedly heavily and made him even more of a marked man, if that was possible for the Premier League’s most fouled player of 2014/’15.

“But pressure has been there for five years because I’m always the man people look at. Maybe this season a bit more than last year, given last season was exceptional. We knew Chelsea would be the team to beat this year. That made life harder, but it doesn’t explain everything. Personally, it’s nice to have a good season, but to follow it up again is even better still.

“This is my fourth year in English football so, maybe, a spell like this was always on the cards. Maybe I should have seen it coming. It’s been an accumulation of things: a bit of tiredness, a bit of this, a bit of that. I’m not looking for excuses. And it’s been an important period in my development. I’ve learned from it.

The interim manager, Guus Hiddink, – “He has given us a bit more freedom and the confidence to raise our game” – has been denied the Belgian’s regular involvement as yet, but fitness and, judging by the 17-minute cameo at Watford in midweek, confidence have now been restored.

Manchester United will be braced for an awkward afternoon in south-west London on Sunday even if Chelsea’s hopes of finishing in the top four may already be dashed.

The prospect of missing out on the Champions League next term would normally be abhorrent. But, when you languish 16 points off the top four with 14 games to play, reality kicks in. Guardian Service