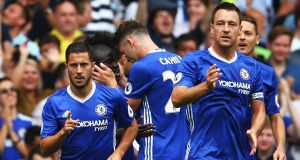 Eden Hazard inspired Chelsea to a thumping 3-0 win over Burnley to maintain their perfect start to the season.

Burnley may have beaten Liverpool with 19 per cent possession of the ball last weekend, but Antonio Conte’s rampant side never looked remotely like falling for the counter-punch.

In fact the only surprise was that they only scored three as Hazard and Diego Costa could probably have bagged a hat-trick apiece.

As it was, they had to settle for Hazard’s fine ninth-minute opener, Willian’s first of the campaign shortly before half-time and a late strike from Victor Moses to make it three wins out of three.

Hazard got the ball rolling when he collected Nemanja Matic’s pass inside his own half and galloped unchallenged down the left towards the Burnley penalty area.

The Belgian skipped inside Clarets defender Michael Keane before curling his shot past goalkeeper Tom Heaton and inside the far post from 20 yards.

Hazard almost had a second five minutes later when he turned Matic’s cross goalwards but Ben Mee cleared his effort off the line.

Costa was having a quiet first half but he could have doubled the lead when Oscar cut the ball back in the area, but the Spaniard’s first-time shot was straight at Heaton.

Instead Costa turned provider five minutes before half-time, knocking a square ball to Willian who instead of playing the one-two, simply stepped past Matt Lowton and lashed an angled drive past Heaton.

Burnley did not manage a single effort on goal in the first half and Dean Marney’s shot at the beginning of the second was barely worthy of the name as it flew high over the crossbar.

Hazard was still enjoying himself at the other end, though, and his darting run and ball into the box was touched on by Matic to Costa, who once again fired too close to Heaton.

The busy Burnley goalkeeper got down well to keep out a Hazard volley from the edge of the area, with John Terry skying the rebound.

Hazard fizzed another effort inches over the top before wriggling clear and forcing Heaton into another save, with Costa this time unable to snaffle the loose ball.

With Hazard and Costa given the last few minutes off it was left to substitute Moses to put the gloss on the scoreline in the dying moments when he arrived at the far post to tuck in Pedro’s cross.

Conte admitted the upcoming international break is not perfect as he looks to continue the momentum of their fine start.

“In this game we started well and played good football the whole game, but we know we can improve and we must improve.

“It’s a pity now that we have this international break because after three wins I want to continue to play games. But we have to stop.

“It’s important to start in a good way. Usually when a new manager arrives he brings his method of football and new ideas, and you can have good ideas but it’s also important to have results, so to start in this way is good for me.

“To start the season with three wins, and a win in the cup, is good for the confidence of the players and the fans, and me. I see a lot of positive things but we can improve.”

Hazard, who scored just four goals in 31 appearances during a tough campaign last season, has impressed the former Italian manager since his arrival.

“I’m pleased for him,” added Conte. “He’s a fantastic player, he’s working well and I like his attitude. That is very important to me.”

Burnley boss Sean Dyche admitted the opening 45 minutes was sub-standard from his side .

“The first half was poor as we’ve played in about a year,” said Dyche. “But it was against a very strong group, you only have to look at who they brought on to see the huge gulf between where we are as a club and this one.

“But we did not perform well at all in the first half. And if you make poor decisions like we made, against a strong side, then you are going to be in trouble, and we were.

“They were far better than us. We gave the ball away too much. You have to play on the front foot and we didn’t do that.”

Burnley at least did not leave Stamford Bridge entirely empty-handed as Dyche confirmed they are set to take Blues striker Patrick Bamford on loan.