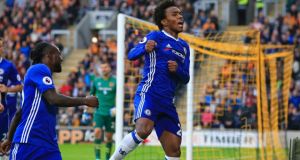 Diego Costa got Chelsea’s season back on track with a dominant second-half performance to sink Hull at the KCOM Stadium.

The Spain striker set up the opener for Willian on the hour mark then curled home a similar effort six minutes later to end his side’s run of two consecutive Premier League defeats with a 2-0 win.

It was a timely tonic for Blues boss Antonio Conte who had seen his side struggle in a disappointing first half in which they failed to muster a single shot on target.

But for the acrobatics of Thibaut Courtois, who saved from Robert Snodgrass and Ryan Mason, Chelsea could have been heading for another damaging defeat.

Chelsea’s underwhelming start to the season had seen the pressure mount on Conte, who admitted on Friday there was “no magic wand” to correct this campaign’s glaring inefficiencies.

He replaced the misfiring Branislav Ivanovic with Marcos Alonso and handed Victor Moses his first league start for the club since May 2013.

Things were far from happy at Hull, too, with Mike Phelan still stalling on talk of a permanent deal and his side smarting from last weekend’s comprehensive 5-1 defeat at Anfield.

But an encouraging start lifted the hosts as a foul by David Luiz set up a free-kick chance for Snodgrass, whose deflected effort was brilliantly tipped over the bar by Courtois.

Luiz was plainly struggling in his deep sweeper role and minutes later he was left trailing by the bright Dieumerci Mbokani, who was handed his full debut along with Markus Henriksen.

Mbokani was just beaten to the ball by the advancing Courtois but the visitors had been served ample warning that Phelan’s men were capable of conjuring a shock result.

Willian dragged the ball across the face of goal from a tight angle but Chelsea were struggling to muster any chances of note while the Snodgrass-inspired Tigers continued to impress.

Adama Diomande wasted a half-chance in front of goal then Mason had a shot blocked after the flat-footed visitors’ rearguard failed to deal with the initial shot in the box.

Moses saw a penalty appeal waved away by referee Anthony Taylor after tumbling under a challenge from Diomande in the box as the visitors continued to struggle to create any significant chances.

And the hosts ended a relatively comfortable first half with a long-range drive from Mason that was beaten out by Courtois.

But Chelsea looked a different side in the second period, with Eden Hazard firing their first shot on target in the 48th minute with a stinging drive which Hull goalkeeper David Marshall did well to tip over the bar.

The visitors should have grabbed the lead just before the hour mark when Costa rounded the advancing Marshall but saw his shot from a tight angle deflected onto the post by Jake Livermore.

N’Golo Kante was on hand to meet the rebound but somehow contrived to blast his effort over the bar from no more than eight yards out.

But Chelsea grabbed the lead three minutes later when more fine work from Costa found Willian on the left, the Brazilian turned Henriksen and David Meyler before curling a superb shot into the roof of the net.

Chelsea had looked a different side since the interval and they stretched their lead in the 67th minute when Costa blasted home after Nemanja Matic’s blocked effort landed perfectly for Costa, who fired home from a similar position.

A superb tackle from Curtis Davies denied Willian a clear run on goal and late substitute Pedro was also denied as the visitors eased to victory.