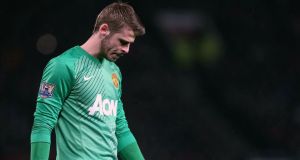 The proposed deal that would see David de Gea move from Manchester United to Real Madrid has fallen through at the last minute after the neccessary paperwork was not lodged to La Liga in time. Photo: Peter Byrne/PA Wire.

Real Madrid have defended their conduct over the failed bid to sign David de Gea and accused Manchester United of holding up the deal.

However, the Spanish club will not fight to complete the signing after they were unable to register the goalkeeper with the Spanish league before the country’s midnight deadline on Monday.

United had claimed Madrid were the ones to blame for the collapse of the deal, but the Spaniards put out a statement on Tuesday condemning the actions of the Old Trafford club.

“Real Madrid has done everything necessary, and at all times, to implement these two transfers,” they said, insisting that it was the late completion of negotiations between Manchester United and Keylor Navas, who was to go in the opposite direction in a deal worth £29.3m to United, that slowed the process down. The club said it received “the full documentation at 00:02 and tried to access the TMS but it was already closed”.

Despite having initially briefed that they had not given up hope, Madrid will not appeal against the decision meaning that De Gea will remain at Old Trafford with Navas to continue at the Santiago Bernabéu. He is out of contract next summer and will be able to leave United on a free transfer.

The league does not currently intend to make any statement but De Gea’s name was not included on its list of completed transfers published after the Spanish transfer window closed.

The league has confirmed to The Guardian that the paperwork did not arrive on time, with reports in Spain timing its arrival at 00.28. El País quoted a league source as saying that Fifa does not have the jurisdiction to intervene and that “the rules are for everyone”.

Real Madrid’s position was that they had not been given time to provide the registration papers to the league because of delays from Manchester and because of modifications that Navas had requested to his contract.

Madrid though insisted that the deal had been agreed through the Fifa transfer matching system (TMS) before midnight and that would have provided the basis of any appeal.

The international transfer and registration with the league are two different, if related processes and it is Madrid’s responsibility to register the player with the league, not United’s. Even if the transfer had gone through, the subsequent registration on which it depended did not.

Sources at the league have suggested that, not only did the paperwork not arrive in time, there was no prior communication with Madrid: the Spanish club did not reassure them that the paperwork was on the way or request that they be patient or flexible.

Madrid have now decided not to appeal. United do not intend to appeal either.

De Gea was described as being “distraught” about the late twist to a remarkable day in which United moved out Adnan Januzaj and Javier Hernández and made Monaco’s Anthony Martial the most expensive teenager in world football at £36m.