Catch up on all the injury and suspension updates 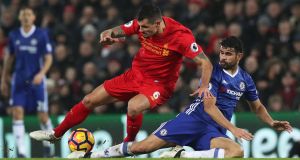 Arsenal (4) v Hull (18), Live Sky Sports 1, 12.30pm
Arsenal have doubts over the fitness of Hector Bellerin. The right back appeared concussed when he left the field in last weekend’s defeat at Chelsea, so Gabriel looks likely to be called upon to face the Tigers. Arsene Wenger’s midfield concerns eased with Mohamed Elneny’s timely return from the African Nations Cup but Aaron Ramsey (calf) and Santi Cazorla (Achilles) remain sidelined and Granit Xhaka is banned.

Manchester United (6) v Watford (10)
Manchester United defender Phil Jones will again be absent with a foot injury, having missed last weekend’s win at Leicester, but Marcos Rojo is available after picking up a knock at the King Power Stadium. Jose Mourinho has no new injury concerns, with Luke Shaw and Anthony Martial pushing for game time while Wayne Rooney is back from illness.

Watford midfielder Valon Behrami and centre back Miguel Britos are both still recovering from knocks and are unlikely to play at Old Trafford, while defender Juan Zuniga has come down with a fever and is unavailable. Nordin Amrabat is also out with an ankle problem and Christian Kabasele remains sidelined with a calf injury.

Middlesbrough (15) v Everton (7)
Middlesbrough midfielder Gaston Ramirez could return to the squad after resuming training. The Uruguay international joined his team-mates at their warm-weather camp in Spain this week after being given time off in the wake of transfer-window interest from Leicester. He has missed the last six games, with head coach Aitor Karanka putting his absence down to a knee problem. Full back George Friend remains a doubt with a calf injury, while fellow defender Antonio Barragan will sit out with a hamstring strain.

Everton manager Ronald Koeman has no new injury concerns so his main decisions are tactical. Midfield is the greatest area of competition, with Idrissa Gana Gueye not even getting off the bench for last weekend’s 6-3 win over Bournemouth and impressive youngster Tom Davies restricted to a substitute role. Midfielder Mo Besic is still working his way back to fitness from a knee injury while teenage forward Dominic Calvert-Lewin is recovering from an ankle problem.

Stoke (11) v Crystal Palace (19)
Xherdan Shaqiri and Glen Johnson are set to miss out once again for Stoke. Winger Shaqiri (calf) and defender Johnson (Achilles) have each missed the last two games and are nearing returns, but this weekend’s match is likely to come too soon. Ramadan Sobhi could be back in the matchday squad after completing his African Nations Cup campaign with Egypt, while Geoff Cameron, Jonathan Walters (both knee), Jack Butland (ankle) and Stephen Ireland (broken leg) all remain sidelined.

Palace boss Sam Allardyce has both Mamadou Sakho and Luka Milivojevic available. Sakho, on loan from Liverpool, has been striving to increase his match fitness having not played since April while Serbia international Milivojevic is now in contention having secured a visa. Fellow new recruit Jeffrey Schlupp (hamstring) could be involved as Allardyce looks to bounce back from a 4-0 home loss to Sunderland last weekend.

Sunderland (20) v Southampton (13)
Sunderland boss David Moyes is hopeful of having defender John O’Shea (hamstring) and winger Adnan Januzaj (hip) fit. The pair picked up injuries in last Saturday’s 4-0 win at Crystal Palace but have trained this week. Januzaj’s midfield colleague Jack Rodwell (also hamstring) has not been as fortunate and will not be involved. Goalkeeper Jordan Pickford (knee) remains out along with Jan Kirchhoff, Paddy McNair, Victor Anichebe, Duncan Watmore (all knee) and Lee Cattermole (hip), while Papy Djilobodji is suspended.

Southampton’s club-record signing Sofiane Boufal will miss out because of an ankle injury. His absence, which could yet extend to the EFL Cup final against Manchester United on February 26th, further weakens a squad already missing defender Virgil van Dijk, also because of an ankle injury. Nathan Redmond is pushing for a first-team recall having appeared as a substitute in last week’s 3-1 home defeat to West Ham.

West Ham (9) v West Brom (8)
West Ham are hopeful striker Andy Carroll will shake off a minor groin problem. Manager Slaven Bilic will also check on left back Aaron Cresswell’s tight hamstring and midfielder Cheikhou Kouyate, who has a dead leg. Sam Byram (hamstring) and Havard Nordtveit (ankle) are back in contention but Diafra Sakho (back) and Angelo Ogbonna (knee) are long-term absentees.

Jonny Evans and Claudio Yacob are ready to return for West Brom. Defender Evans has missed the last five games with a calf problem while Yacob was sidelined for the 1-0 win over Stoke as the club were concerned he had appendicitis. The midfielder required hospital treatment but the problem was not as bad as first feared and he is expected to be in the travelling squad.

Liverpool (5) v Tottenham (2), Live BT Sport 1, 5.30pm
Liverpool centre back Dejan Lovren remains a doubt after missing last weekend’s defeat at Hull with a knee injury. He has not trained all week, while his likely back-up Ragnar Klavan has spent six days in bed with an infection which forced him out of the KCOM Stadium match. Midfielder Adam Lallana missed two days of training with an Achilles problem but should be okay to start.

Tottenham will be without defenders Danny Rose and Jan Vertonghen. Rose has injured his knee and Vertonghen is still recovering from an ankle problem, meaning Ben Davies and Eric Dier are expected to continue in defence. Erik Lamela is still struggling with pain in his hip but Kieran Trippier is available again after overcoming an ankle injury.

Burnley (12) v Chelsea (1), Live Sky Sports 1, 1.30pm
Burnley new boys Robbie Brady and Ashley Westwood are pushing to start after making their respective Clarets debuts off the bench at Watford last week. Boss Sean Dyche is without midfielder Jeff Hendrick, who starts the first match of his three-game suspension after being sent off early in the defeat at Vicarage Road. Dyche does not expect any new concerns but Steven Defour is still out with a hamstring strain and Dean Marney has had an operation on his cruciate ligament injury.

Cesc Fabregas and Willian could be rotated into the Chelsea starting line-up at Turf Moor. Blues boss Antonio Conte is wary of the Clarets’ formidable home record, but knows the fine form of Fabregas and Willian gives him options. The Premier League leaders have no injury concerns, while defender David Luiz continues to play with pain in his knee sustained in a tackle by Manchester City’s Sergio Aguero.

Swansea (17) v Leicester (16), Live Sky Sports 1, 4pm
Jordan Ayew features in the Swansea squad for the first time. Ayew joined from Aston Villa last month but the forward has been away with Ghana at the African Nations Cup and only met his new team-mates this week. Ki Sung-yueng (knee) and Jefferson Montero (hamstring) are definitely ruled out, while Leon Britton might also be missing with a recurrence of a calf problem.

Leicester boss Claudio Ranieri is expected to make major changes again after rotating his squad for the midweek FA Cup replay against Derby. The likes of Kasper Schmeichel, Robert Huth, Wes Morgan, Danny Drinkwater, Riyad Mahrez and Jamie Vardy should all return against the Swans. Winger Demarai Gray is pushing for a starting place after impressing on Wednesday night while Islam Slimani (groin) is fit again and recent signing Molla Wague could be involved in the squad. However, Leonardo Ulloa (thigh) remains out.

Bournemouth (14) v Manchester City (3), Live Sky Sports 1, 8pm
Bournemouth could be without the defensive trio of Simon Francis, Charlie Daniels and Adam Smith. Francis and Daniels are both battling hamstring issues while Smith is a doubt after missing last weekend’s defeat at Everton. Striker Callum Wilson looks likely to miss the rest of the season, but underwent successful knee surgery on Thursday.

Sergio Aguero and Claudio Bravo could again be on the bench for Manchester City. The club’s top scorer and senior goalkeeper have had to settle for places among the substitutes in recent games, with Gabriel Jesus and Willy Caballero preferred. City have no new fitness concerns, with long-term injury victim Ilkay Gundogan (knee) the only absentee.