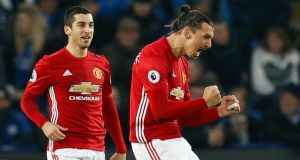 José Mourinho has suggested Zlatan Ibrahimovic may have only one more year left at the highest level, with Manchester United’s manager confident it will be at the Old Trafford club.

The Swede is out of contract at the close of the season, though United hold an option to extend this for another 12 months. Although this has yet to be signed, Mourinho believes it is a formality.

Of Ibrahimovic, who is 35 and has scored 20 times for United since arriving at the club in July, he said: “I’m totally convinced he is going to stay. He came with the intention to stay two years but in the minds of everyone the first year is going better than every expectation, he knows we are going to try again to improve next season and try to share with him in a fantastic way probably the last year of his career at the highest level.

“So I’m convinced that he’s staying, he’s adapted to the club, to the situation, I don’t see any problem with his family. I give him the possibility of an extra day off to go to Sweden, he doesn’t want this ever, so I’m totally convinced he is going to stay.”

Mourinho also stated United would have a “small” market in the summer window, the target being a maximum of four players. “Independent of the numbers, can you spend one, 10 or 100 million, it’s also the philosophy – we prefer to bring two three or four players, players that feel an idea, a football we try to play, that can improve our squad,” he said. “We are not interested in signing six or seven or sell six or seven. We are not going to play this game,” he said.

“We are stable, so we think our market in the summer will be soft, will be natural – some players to leave, some players to come but in a very natural way so I think the word Ed [Woodward] used was a good one. You work with the players and you know the players better – even in relation to this everything is balanced, I’m not negatively surprised with anyone, I didn’t have an incredible impact with some player. So everything is balanced and I think our summer will be quite small.”