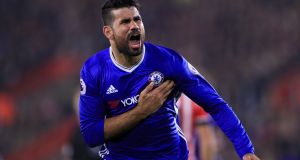 Chelsea striker Diego Costa will not feature in the Premier League game at Leicester on Saturday. Photograph: John Walton/PA Wire

Diego Costa has been dropped from the Chelsea squad for Saturday’s Premier League fixture at Leicester City, after a row that involves a massive offer made to him from a club in the Chinese Super League.

The volatile striker has also clashed with one of the Chelsea fitness coaches over an injury that he feels he has been carrying, and he did not travel to Leicester with his team-mates on Friday. Costa has not trained fully this week and the manager, Antonio Conte, has become involved in the argument.

It is the situation involving the Chinese club that has led to the greater consternation at Stamford Bridge. Costa, in common with an increasing number of A-List Premier League players, has been the subject of an eye-watering offer from China and there is the fear at Chelsea that his advisers could be using it to lever him away.

Costa has recovered his best form this season and his goals have been instrumental in the club’s surge to the top of the table.

The hierarchy have taken a dim view of the situation regarding China and, amid fears that the 28-year-old’s head might have been turned, they have pledged to hold him to his contract, which expires in 2019.

Conte said at his press conference on Friday afternoon that he had at least one decision to take in terms of his selection for the Leicester game. “I have to check a couple of situations and then decide,” he said. “I don’t want to say exactly what and give an advantage to our opponent.”

He was also asked, in relation to Dimitri Payet going on strike at West Ham United, whether he had ever experienced any issues about players refusing to play for him.

Conte has just been named as the Premier League’s manager of the month for the third month in succession – a new record – on the back of his team’s 13-match winning streak but after their defeat at Tottenham Hotspur on the Wednesday before last, he has been consumed with bouncing back. He could have done without this latest headache involving Costa.