‘I have given all the players a chance to convince me of their qualities,’ says United manager 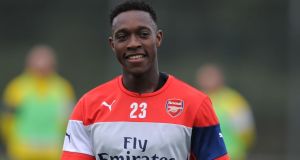 Louis van Gaal has delivered a brutal explanation for Manchester United’s decision to sell Danny Welbeck to Arsenal, saying the England international was below the standards required at Old Trafford and there were younger players waiting to come through who had the potential to make more of themselves.

Van Gaal said the decision to let Welbeck go had been made before it became apparent United could bring in Radamel Falcao on loan from Monaco and was essentially based on the player’s scoring record over the years.

“I have given all the players a chance to convince me of their qualities,” Van Gaal said. “Yes, Danny Welbeck was here from when he was nine. He has played, after [his 2010-11 loan at] Sunderland, three seasons at Manchester United, but he doesn’t have the record of [Robin] Van Persie or [Wayne] Rooney and that is the standard. That is why we let him go – because of Falcao but also the youngsters who can fit in.”

Welbeck, with 29 goals from 142 United games, was sold to Arsenal for €20 million transfer deadline day, with Paul Scholes and Gary Neville – who labelled the move “a strange one” as it strengthened a direct rival – among those objecting to the move, but Van Gaal said the same applied to the 23-year-old as it did Javier Hernandez, now on loan at Real Madrid.

“We spoke with Danny Welbeck and also Chicharito before there was the chance we could get Falcao. We have to be fair about that because, for example, I see in that part [of the pitch] we have a lot of youth that can fit in.”

Van Gaal’s comments about younger players was almost certainly a reference not just to Adnan Januzaj but James Wilson, an 18-year-old who marked his senior debut in May by scoring twice against Hull City.

Welbeck had asked for a transfer in April because of his frustrations about not playing regularly in his favoured central role and Van Gaal was emphatic about replacing one of the club’s last remaining Mancunians with a player of Falcao’s gifts.

He said: “When you can hire or buy a player like Falcao I don’t have doubts because he is one of the best strikers in the world .”