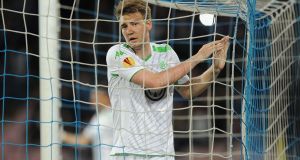 VfL Wolfsburg’s former Arsenal forward Nicklas Bendtner could be on his way back to the English Premier League. Photograph: Getty Images.

Crystal Palace have been made aware of Nicklas Bendtner’s availability at Vfl Wolfsburg and are considering bringing the former Arsenal forward back to the English Premier League, initially on a six-month loan deal.

Bendtner has been used largely from the bench by the Bundesliga club since departing England in 2014 on a free transfer, and has scored four goals this season albeit only once since late August.

He still has 18 months to run on his deal at the German club, though there has been criticism of the 28-year-old, who has made four Champions League appearances for Wolfsburg this term, for an apparent lack of fitness going into the team’s winter training camp prompting suggestions he would be permitted to leave.

Palace, who have failed to score in their last five Premier League games, have effectively agreed terms with Emmanuel Adebayor over a short-term deal but, given the Togolese has not played competitive football since May 2015, are exploring all their options before committing ahead of the closure of the window on February 1st.

“We’re still going down the line of Adebayor and a couple of the others mentioned, but a few more have come to light,” said Alan Pardew, who will again be without Dwight Gayle and Bakary Sako through injury against Tottenham tomorrow.

“Bendtner is available, and there’s someone else we are looking at. We’re after someone who can fit into our group and give us a lift. A big player coming in might do that.

“We’re having a terrific season, but we’re experiencing a lull right now. So we need to give the fans a lift, as well as those in our group. We have to take that opportunity [and secure a forward]. It will make sense for our fans, our players, and our chairman, Steve Parish. He’s probably keener than me and is hunting around for one.”

Palace’s long-standing pursuit of the likes of Islam Slimani at Sporting Lisbon and Fiorentina’s Khouma Babacar have been deflected by the valuations placed on the forwards’ heads by their current clubs, while Chelsea are reluctant to lose Loic Remy during this month’s transfer window.