Conte unhappy with squad ahead of his ‘most difficult season’ 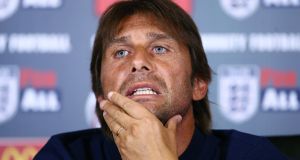 Antonio Conte: “In Italy the people know that I have not great patience.” Photograph by Jordan Mansfield/Getty Images

Antonio Conte believes he is facing the “most difficult” season of his managerial career, with his Chelsea squad light on numbers and his anxiety mounting as the clock ticks towards the closure of the summer transfer window.

The Premier League champions have spent £127 million on Antonio Rüdiger, Tiémoué Bakayoko and Álvaro Morata and have taken Willy Caballero on a free. But Conte’s squad is appreciably thinner than it was last season, given the number of players to depart, either on permanent deals or loans. The most high-profile outgoings have been John Terry, Nemanja Matic, Asmir Begovic, Nathan Ake, Kurt Zouma, Ruben Loftus-Cheek, Nathaniel Chalobah, Bertrand Traoré and Dominic Solanke while Diego Costa will not play for the club again, as he awaits his move away. He wants to rejoin Atlético Madrid, following the breakdown of his relationship with Conte.

With Bakayoko not yet fit in the wake of knee surgery, Eden Hazard out following an ankle operation and Pedro struggling because of a fractured cheekbone, Conte faces selection issues for tomorrow’s Community Shield against Arsenal. The make-up of his substitutes’ bench will be particularly interesting.

“For sure it will be the most difficult season of my career as a coach,” Conte said. “Why? There are many reasons and I haven’t a lot of time to explain a lot of these reasons. But I am sure about this. In this moment we have a small squad. Everyone can see the situation. It’s not because the coach shouts ‘I want this’ or ‘I want this’. We hope to improve it because it’s very clear. But for me and the players the best way now is to be focused on the pitch and not to think of the other situation.”

Conte said he did not know why there had been a delay in signing the players he so plainly needs. “Everyone is trying to do their job but, for sure. I think this question is good for the club – not for me,” he said. “What do they tell me? We have to wait for the best moment, the best solution. We have to wait.”

There is one problem. Conte’s patience is notoriously fragile. “In Italy the people know that I have not great patience,” he said with a smile. “But I am learning in England to discover more patience in myself.”

Conte gave a curt response when asked to explain why Matic had been sold to Manchester United rather than a foreign club. “You have to ask the club about this,” he said. It was difficult to tell whether he was annoyed about having strengthened a rival or had merely sought to defer to the higher-ups on matters of transfer policy, as he often does. Conte was happy to sell Matic and excluded him from training three days before the club went on their tour to China and Singapore without him.

The picture in terms of squad depth has been placed into sharper focus by Chelsea’s return to the Champions League, after a season without any European football, and there can be no guarantees that Conte will enjoy the same good fortune on the injury front. “We were very lucky last season and, also, very good [in terms of the work on conditioning],” Conte said.

Arsenal manager Arsene Wenger has a decision to make on whether to involve Alexis Sanchez in the meeting with Chelsea.

Sanchez was handed an extended summer break following the Confederations Cup and only returned to training on Tuesday after suffering from illness, meaning both he and Shkodran Mustafi, who also played in the tournament, could be left on the sidelines.

Club-record signing Alexandre Lacazette and fellow new recruit Sead Kolasinac are in line to feature but, while Aaron Ramsey and Mesut Özil are expected to be fit after minor niggles, Francis Coquelin (ankle), Gabriel (knee) and Jack Wilshere (leg) miss out.