The club, which is threatened by relegation, declares its unwavering support for the Italian 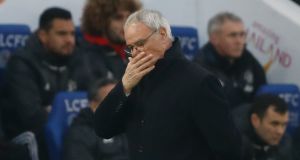 Claudio Ranieri has come under pressure for changing his tactics. Photograph: Reuters

Claudio Ranieri has mounted an impassioned defence of the “warriors and fighters” in his Leicester City side, who won the title last year but are now threatened by relegation, as the club declared their “unwavering support” for the manager.

The champions have won just two of their past 15 matches in the Premier League and sit a point clear of the relegation zone in 16th place. An official statement amounting to a vote of confidence in Ranieri, was released just moments before he spoke to the media in the build-up to Leicester’s FA Cup replay with Derby County tonight.

“Maybe the chairman wants to stop all the speculation,” Ranieri said of the statement. “For me, it’s important to try to find the right solution for the players, that is it.

“When you don’t win, you lack confidence, it’s normal, but fortunately these players are warriors,” the Italian added. “They are used to fighting. They already lived this situation. They’ve lived the good things but also the bad. So I stay with the soldiers, with the warriors who know the problem, who know the enemy.”

With the chairman, Vichai Srivaddhanaprabha, now expected to fly in to meet his manager today, Ranieri gave a bravura performance. He compared himself to a “windsurfer on a sea of sharks”, addressed rumours he had changed the club’s dietary regimen by saying, “I don’t like pasta”, and confessed he speaks in “shitty English” to his players. It appeared a determined attempt to take the temperature out of a situation which has turned from fairytale to apparent crisis in just over six months.

Ranieri said he would always be grateful to his players for what they achieved last season and was insistent that reports of discord within his squad were in no way correct. Remarks made by Kasper Schmeichel after Sunday’s 3-0 defeat to Manchester United in which he said the problems at the club ran from “top to bottom” had been interpreted as criticism of his manager, but Ranieri said Schmeichel had been trying to help.

“I love these players, they gave me something special in my career, I thank them all my life for this,” he said.

“I am in agreement with all my players. Kasper is one of my leaders and he wants to stimulate everyone, he wants to help me stimulate the team. We have leaders, they are speaking together trying to help the team, support the team, the dressing room is fantastic.”

Ranieri has also come under pressure for changing his tactics. One of the more striking incidences being the switch to a new diamond formation in midfield for last month’s away game against Southampton, which Leicester had only two training sessions to practise. They went on to lose 3-0. “I don’t change any more, from now on it is 4-4-2. Also, I am Pinocchio,” Ranieri joked.

“This year I change [tactics] a little more because when things don’t go right, I must try to find a solution,” he added. “But my players understand the tactics and the systems well. We speak every time about what we need to improve and it’s OK with all my staff and with everybody. I am very happy, I am extra happy if we win.”

One player with whom Ranieri said he had had conversations was Riyad Mahrez. The current PFA player of the year has been a shadow of the player from last season, but Ranieri said the Algerian was simply overthinking his status as one of the league’s most marked players.

In their statement, the club acknowledged the “recent speculation” about Ranieri while reaffirming their commitment to the 65-year-old. Leicester also stuck with then manager Nigel Pearson during similar, even more stressful, situations two years ago and insisted their strategy for success was “based on stability”.

“In light of recent speculation, Leicester City Football club would like to make absolutely clear its unwavering support for first-team manager, Claudio Ranieri,” the statement read.

Ranieri will make changes to his side for Wednesday night’s replay against Derby. The Premier League champions face a crucial trip to relegation rivals Swansea at the weekend and Ranieri’s selection will be made with that game in mind.

Leicester’s owners issued a statement on the eve of Wednesday night’s FA Cup fourth round replay pledging their “unwavering support” for Ranieri, who has come under increasing scrutiny following a miserable run of results. Sunday’s 3-0 defeat to Manchester United left Leicester just one point above the relegation zone.

Derby also head into the match on the back of a league loss but McClaren’s side are fighting for promotion from the Championship via the play-offs. “We are the underdogs again,” McClaren told reporters at his press conference. “I’m not concentrating on Leicester and their situation. I’m looking for a performance from my team – individually and collectively. Guardian Service

1 Liam Toland: Larmour can distract England while others flourish
2 ‘Manchester United are lucky to have you’: Klopp responds to Donegal schoolboy’s letter
3 This month a decade ago, football and Dublin changed course
4 Cian Healy’s hunger for battle undiminished by the years
5 Solskjaer complains about Molten balls after Brugge draw
Real news has value SUBSCRIBE