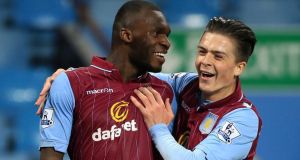 The Premier League title race may have run out of legs but this battle to avoid relegation is becoming increasingly compelling. Christian Benteke scored a hat-trick to lift Aston Villa three points above the basement zone just when it appeared Charlie Austin’s 17th goal of the season had earned Queens Park Rangers a second win in four days in the West Midlands to lift them clear.

Villa remain the lowest scorers in the division but, under Tim Sherwood, they have rediscovered their attacking mojo, no one more so than Benteke whose equalising free-kick seven minutes from time was his seventh goal in his last five games for his club.

Sherwood endured mixed emotions on his reunion with Chris Ramsey, his opposite number, and now has another homecoming as Villa visit Tottenham Hotspur on Saturday before their FA Cup semi-final at Wembley. Then came the breathtaking ending as Austin thought he had won it for QPR, a superb finish at the near post after Matt Phillips beat Kieran Richardson and Carloz Sánchez with ease before pulling the ball back, only for Benteke to equalise five minutes later.

Sherwood and Ramsey embraced on the touchline before kick-off as they briefly acknowledged a friendship that had been put on hold because of the significance of this match.

Drinking buddies and long-term coaching colleagues in their time together at Tottenham, the two managers had avoided talking to one another in the buildup to a game that could decide their Premier League futures.

With only four points separating five of the bottom six teams at kick-off, Villa knew that victory would bring them a five-point buffer from the relegation zone but that defeat would allow QPR to flip them into the bottom three. With seven games remaining, the stakes were that high.

Rangers’ resounding 4-1 victory across Birmingham at West Bromwich Albion on Saturday had set the cat among the pigeons but Villa, with half their outfield side changed from their defeat at Manchester United, were a different proposition for much of the first half once they had banished their nerves.

For the fourth successive visit to Villa Park, QPR took the lead. On the three previous occasions, they had failed to win, mustering a single point. So perhaps the home side should have not panicked unduly when Phillips dived to head in Bobby Zamora’s cross from the left edge of the box in the seventh minute. But the manner in which Villa’s nervy back four failed to deal with Austin’s initial right-wing centre was evidence of the edginess pervading both sets of players.

Sherwood unzipped his jacket at this disappointment. Within three minutes, he was throwing it to the ground in unbridled jubilation as Villa equalised. It was as if he accepted there was no hiding place. This was down to sheer naked nerve, and who could hold theirs more than the other team.

Benteke has been among the players revitalised since Sherwood’s arrival eight games ago but he probably could not believe how much freedom he was allowed as his goals turned the game on its head by half-time.

The Belgian looked marginally offside as he ran on to Fabian Delph’s pass down the left wing. Mauricio Isla looked simply terrified as he allowed Benteke to cut back inside on to his favoured right foot as they entered the penalty area and strike a shot that deflected up off the Chilean defender and over Robert Green into the far corner of the net.

Villa proceeded to pepper the QPR goal. Ron Vlaar, back after six weeks out with a calf injury, hammered a shot that nigh on knocked out Sandro. Gabriel Agbonlahor was hauled back by Clint Hill as the striker rolled his man going into the penalty area. Benteke saw his header from Leandro Bacuna’s cross deflected just wide. But the dam had to burst.

Sanchez won a crucial tackle against Niko Kranjcar on the edge of the Villa penalty area for Agbonlahor to nick the ball into the QPR half just as Sandro took him out. Benteke rampaged forwards and, turning inside the hapless Hill, calmly dinked home his ninth goal of the season.

The interval came at the right time for QPR, who not only had a chance to regroup but soon to reshape. Ramsey brought on Armand Traore as a left wing-back and Karl Henry as a third central midfielder, with Phillips staying very wide on the right in a 3-5-2. This stretched the game and, when a corner ensued in the 55th minute, Hill headed in Phillips’ delivery for his first goal in 20 months.

Sherwood had attempted his own tactical tinkering by giving Republic of Ireland under-21 midfielder Jack Grealish his full Premier League debut but he struggled to make an impact before being replaced by Joe Cole with 20 minutes remaining.