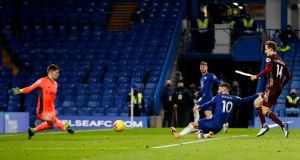 Giroud bagged his fifth goal of the week in fully vindicating boss Lampard giving the France hitman his first league start of the campaign.

Zouma then headed home from Mason Mount’s corner as the Blues battled back from ex-Chelsea striker Patrick Bamford’s early opener for Leeds.

At the death Pulisic turned in Timo Werner’s low cross to seal another fine result for the Blues.

Bamford’s eighth league goal in 11 matches had Chelsea – in front of 2,000 fans returning at Stamford Bridge – sweating, but, led ably by the relentless N’Golo Kante, the home side ground out a hugely-impressive victory.

Giroud scored all four goals in Wednesday’s 4-0 Champions League romp in Sevilla, and the 34-year-old rightly stepped up to start against Leeds.

The France striker should have had two goals here too, as Werner somehow contrived to keep Giroud’s header out of the net with not one but two fluffs – from a mere yard out.

This was rival coaches’ Lampard and Bielsa’s first meeting since the ‘spygate’ dramas of the 2018/19 campaign when rancour and recrimination dominated clashes between Derby and Leeds.

Lampard’s Derby got the last laugh in that season’s playoffs, and so the ex-England midfielder got one over on Bielsa here.

Chelsea’s only frustrations amid a hard-fought win were Werner’s trials in front of goal, and a potential hamstring injury to influential playmaker Hakim Ziyech.

The Blues extended their unbeaten Premier League run to nine matches, having last tasted defeat against Liverpool on September 20th.

Thiago Silva’s raking ball sent Ziyech through early on but the Morocco star was unable to beat Illan Meslier.

Chelsea’s promising start evaporated into the freezing autumn air though, as a mix-up between Zouma and Edouard Mendy let Bamford sneak through to tap home.

Giroud so nearly levelled with a fine flicked header from Mount’s near-post corner – only for team-mate Werner to thwart him unwittingly.

Germany striker Werner latched onto the goal-bound header intent on claiming the finish for himself, only to stub the ball up into the air.

The £53 million summer signing latched onto the loose ball but even at the second attempt could only blast against the crossbar from point-blank range.

Bamford fired over from a cute cutback as Leeds continued to threaten, before Ezgjan Alioski struck the woodwork with a rasping shot.

His strike would never have counted however, with Luke Ayling ruled offside in the build-up.

Giroud won possession back high upfield only to drag his shot wide as Chelsea battled for a foothold.

And when a breakthrough finally came, it simply had to be the man of the moment himself who would deliver.

Ziyech drifted inside and sent Reece James racing down the right flank, and the England star’s low cross begged to be turned goalwards.

Giroud answered that call, whipping into the net to drag the Blues level, just ahead of the half-hour.

The remainder of the half proved a cagey affair, punctuated most notably by Kante’s stealthy creep into a position of midfield dominance.

Leeds had tried to pass the France World Cup-winner out of the match and succeeded for the first quarter – only for Kante to adjust his positioning and start mopping up in typical fashion.

The teams duly reached the break with the 1-1 scoreline intact, before Chelsea opened the second half in bullish mood.

Kai Havertz nodded well wide from James’s teasing free-kick, before Meslier denied twice Werner in the same attack and Mount’s effort was deflected behind for a corner.

Any building Chelsea frustration was eased immediately however, as Mount laid his set-piece on a plate for Zouma to power home a header.

And just when all seemed said and done, Werner finally added a telling contribution, teeing up Pulisic for the third on the break.