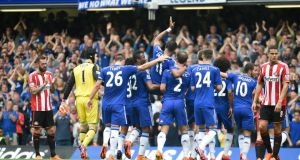 This arena was basking in giddy celebration long before the Premier League trophy was paraded on to the turf, with all the customary pomp and circumstance, and hoisted by the champions. By then, the vast majority in the crowd had bid a giddy farewell to one Chelsea idol in Didier Drogba and sung themselves hoarse pleading for another, Petr Cech, to remain in these parts a while longer. In truth, this whole occasion had the air of a testimonial.

Drogba, captain for the day, had made clear prior to kick-off his intention to leave once his contract expires next month. “I want to play for at least one more season and, in order to play more football, I feel I need to go to another club,” he had said. “All the fans know my love for Chelsea and I hope to be back here in the future in another role.”

The fourth official held aloft his number just before the half-hour mark, prompting Chelsea’s players to hoist him on to their shoulders – Branislav Ivanovic, Mikel John Obi and Juan Cuadrado took the brunt – and chairlift him from the field.

Even Cech joined in the throng paying tribute to Drogba, the home club’s entire coaching staff and even the sporting director, Michael Emenalo, greeting the European Cup winner on the touchline. It actually took almost two minutes for the forward to depart and, while his substitution had been pre-planned, even José Mourinho looking rather uncomfortable at the break in play.

He might have been frustrated at the reality his team had conceded moments earlier, Steven Fletcher unmarked beyond the far post to nod Sebastian Larsson’s corner beyond Cech and John Terry, who has featured in every minute of this title-winning campaign, and register a first Sunderland goal since November.

The visitors, bright and relaxed, had enjoyed their own celebrations in midweek, survival having been secured with a goalless draw at Arsenal, although their lead here was short-lived. Cuadrado, in arguably his brightest cameo for his new club, was tripped by John O’Shea, with Drogba’s replacement, Diego Costa, battering in his 20th league goal of a magnificent first season in English football. Loïc Rémy, Gary Cahill and Willian might have eased them ahead before the France forward fizzed a low shot beyond Vito Mannone from the edge of the area to secure the lead.

Rémy added another late on, flicking in Nemanja Matic’s centre at the near-post having eased himself goal-side of O’Shea. Cech, meanwhile, was enjoying what is likely to prove his own farewell after 11 years at this club. The goalkeeper, Drogba and Terry had joined former team-mates from their 2005 Premier League title success on the pitch prior to kick-off, clapping hands with Eidur Gudjohnsen, William Gallas, Ricardo Carvalho, Paulo Ferreira, Carlo Cudicini, Claude Makélélé, Alexei Smertin and Geremi.

That had set the tone for the afternoon, although Cech had offered reminders of his qualities, with saves from Larsson, Connor Wickham and Jermain Defoe. The home support duly bellowed “Petr Cech, we want you to stay”, although another campaign playing understudy to Thibaut Courtois feels unlikely. Clubs across Europe are eager to secure his services.

He will join his team-mates on the open-bus tour around the borough on Bank Holiday Monday, when the Premier League and Capital One Cup trophies will be celebrated with gusto before the post-season tour of Thailand and Australia. If this was to be his last performance as a Chelsea player at Stamford Bridge, it was a fine sendoff.