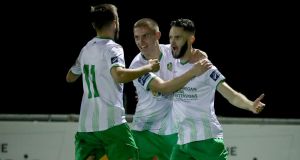 Although they lost James Finnerty to a second booking on 61 minutes, Keith Long’s side got the point to secure a top-four finish with a game to spare.

Bohs goalkeeper James Talbot was the first stopper called into action on four minutes when he stuck out a vital hand as Saints striker Gary Shaw tried to round him after breaking into the box.

Aaron Barry wasted the rehearsed free-kick by miskicking his first-time effort, while at the other end Chris Forrester’s 20-yarder over the wall forced Talbot to scamper across his line and bat away.

Saints striker Ronan Hale managed to get a sight at goal on the hour, only to waste it by lifting the ball over from 12 yards.

New Saints boss Stephen O’Donnell decided to go for it, introducing strikers Glen McAuley and Mikey Drennan, coupled with a switch to three at the back, but they couldn’t force a winner.

Dominating from the start in front of Ireland Under-21 manager Stephen Kenny, FAI Cup finalists Rovers were ahead on 14 minutes.

Dylan Watts floated a free kick to the far post, skipper Lee Grace nodded the ball back into the area for fellow defender Joey O’Brien to head home.

Rovers struck for their second goal right on 45 minutes.

Aaron McEneff’s crisp pass found Under-21 international Neil Farrugia who slalomed past two defenders on the left before dinking a chip to the back post for Graham Cummins to head to the net.

Kearns slipped in merely clearing a back pass straight to Brandon Kavanagh.

The 19-year-old ran in to sidefoot the ball into the unguarded net for his first league goal for the club.

Cork City 1 Dundalk 0
Dáire O’Connor was the Cork City match-winner as he struck in the 44th minute to give them victory over Dundalk at Turner’s Cross.

In a long season, this win gave City their first pair of consecutive victories since May and it was the first time they had overcome the Lilywhites since April of 2018. Having beaten UCD last week to secure safety, the Rebel Army built on that with an encouraging display, though the goal did come after Dundalk had had the better of the first half.

Unfortunately for the Lilywhites they couldn’t fashion any real chances of note and when City broke Garry Buckley found the industrious Ben O’Brien-Whitmarsh, whose ball behind the defence allowed O’Connor to slot home.

In the second half, City didn’t have many opportunities to double their lead while Dundalk upped the ante in a bid to find an equaliser. Home goalkeeper Tadhg Ryan did well to deny Jamie McGrath just after his introduction while Michael Duffy and Patrick Hoban also had opportunities for the visitors.

They went close on 81 minutes as Ryan tipped Robbie Benson’s shot over and then with five minutes left, he produced an even better save to deny Dane Massey from a corner. It ensured the win for the hosts.

Finn Harps 1 Waterford 0
Finn Harps – who have a promotion/relegation playoff against either Cabinteely or Drogheda United to come – overcame Waterford in their final home league game of the season at Finn Park.

Alan Reynolds’s Waterford side have been one of the form teams of late, having won four of their last five league games – the defeat being against champions Dundalk – but have now lost three times to Harps this season.

In a bizarre opening Nathan Boyle had an early chance but there was some confusion about whether he was offside, and in any event his shot was saved by Matt Connor.

But Harps took the lead on six minutes when American defender Josh Smith connected with a Mark Timlin free to send a looping header beyond Connor.

Waterford then had the better opportunities through Shane Duggan, JJ Lunney and Walter Figueira, while just before the break Jacob Borg hit the side netting for Harps.

Waterford had pleas for a penalty dismissed after Georgie Poynton went down in the box on 57 minutes.

The visitors finished strongly but Harps held on to win.

Cabo couldn’t have asked for a better start with Marty Waters putting the home side in front with just five minutes on the clock.

An early ball into the box from Keith Dalton skimmed off the head of Rob Manley and straight into the path of strike partner Waters. A composed Waters took a quick touch before finishing to the back of the net past Luca Gratzer with an unstoppable drive from outside the box.

Drogheda equalised after a spell of persistent pressure just before the 80-minute mark when Hyland unleashed a shot from 25 yards past everybody and straight into the bottom corner, igniting plenty of flares onto the pitch and also wild celebrations from the away support.