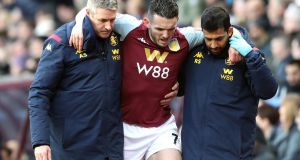 McGinn was forced off after just eight minutes after appearing to get his studs caught in the turf.

Villa boss Dean Smith confirmed after the match that the Scotland midfielder had been sent for an X-ray, with the club confirming the extent of the damage on Sunday.

McGinn has been a key figure for Villa on their return to the Premier League this season and his absence will add to Smith’s concerns after a poor run of form.

They have won just once in their last nine top-flight outings, losing the last four, and the 3-1 defeat to Southampton saw them slip into the relegation zone.

Villa are yet to confirm how long they expect the 25-year-old to be sidelined for, but he will miss key games in their battle to beat the drop.

Villa face Norwich and Watford, the other two sides in the bottom three, in their next two matches, while they face the likes of Brighton and Watford again in January.

Depending on the severity of the injury, McGinn could also face a race to be fit for Scotland’s Euro 2020 qualifying play-off against Israel on March 26th.

His absence would be a huge below as he was his country’s top scorer in their qualifying group with seven goals in 10 games.

McGinn later tweeted: “Thanks everyone for all the messages and support. Gutted but will be back before you know it.”

In-form Danny Ings scored two of Southampton’s goals in Saturday’s game and hailed a vital win for his side as they moved out of the drop zone.

Ings, who has now scored 12 goals in his last 13 games, said on the club website: “It’s massive. We knew how important it was to come here, put in a big performance and get the points.

“I thought we did that. Take the goals out of the equation, the lads defended unbelievably well — you could see when the crowd were up and their team were building momentum, we shut that out quite well.

“Credit to everybody off the ball, because that was just as important as scoring the goals.

“Our defence, the midfield and Longy (Shane Long) working his socks off again...it means so much to the team. It’s so important that we have that side as well as the quality on the ball.”