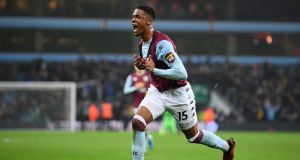 Aston Villa scored with almost the last kick of the game to seal a 2-1 comeback win over Watford at Villa Park on Tuesday that lifted Dean Smith’s men out of the Premier League relegation zone – and dumped Nigel Pearson’s men back in it.

Watford opened the scoring in the 38th minute when Gerard Deulofeu dashed towards the goal line, spun to his left and chipped the ball over towards Troy Deeney who headed powerfully past Villa goalkeeper Pepe Reina from close range.

Villa pulled themselves back into the game in the 68th minute when Watford keeper Ben Foster parried a Matt Targett shot from a tight angle back across the goal and into the path of substitute Douglas Luiz who blasted the ball into the net.

With the game tied, the Birmingham side had been set to drop a place to 19th in the table while Watford would have climbed to 16th.

But after a goalmouth scramble in the 95th minute, the ball fell to the feet of Ezri Konsa who struck a fierce shot which took a deflection off team mate Tyrone Mings and sailed in to give the hosts what could be a pivotal victory in their bid to stay up.

Striker Moise Kean finally opened his Everton account with his first goal for the club but Newcastle United scored twice in stoppage time to snatch a 2-2 draw at Goodison Park.

The 19-year-old, making his 22nd appearance since a €27.5m move from Juventus, celebrated wildly in front of the Goodison Park faithful when firing home after 30 minutes.

Carlo Ancelotti’s resurgent Everton side dominated an injury-hit Newcastle and deservedly doubled their lead in the 54th minute when in-form English forward Dominic Calvert-Lewin notched his 10th league goal of the season.

There looked no way back for injury-hit Newcastle who had barely threatened the Everton goal and substitute Florian Lejeune’s overhead kick looked no more than a consolation.

Yet Newcastle were not finished and Lejeune grabbed the most dramatic of equalisers when he touched home after a goalmouth scramble in the fifth minute of stoppage time.

Southampton made sure there was no repeat of their weekend collapse against Wolverhampton Wanderers as they claimed an impressive 2-0 win at Crystal Palace.

Ralph Hasenhuttl’s side let slip a two-goal lead to lose 3-2 on Saturday but remained in control at Selhurst Park after superb goals by Nathan Redmond and Stuart Armstrong.

Redmond smashed home in the 22nd minute when he was played in behind the Palace defence by Jack Stephens.

Southampton doubled their lead when Armstrong whipped in a curling effort after 48 minutes.

Palace huffed and puffed in response but Saints held firm to move a place and a point above their hosts into ninth on 31 from 24 games.

Harry Wilson and Callum Wilson both got on the scoresheet for goal-shy Bournemouth as they ended their four-game Premier League losing streak with an emphatic 3-1 win over Brighton & Hove Albion.

Bournemouth’s failure to score in those four games meant they slid into the relegation zone, second from bottom in the standings. However, they came at Brighton with all guns blazing from kickoff.

Winger Harry Wilson gave his side the lead in the 36th minute when he collected Dominic Solanke’s layoff and thumped home an unstoppable shot. His namesake Callum then forced Pascal Gross to bundle the ball into his own net from a corner five minutes later.

Wilson then finally got on the scoresheet for the first time in more than three months in the Premier League when he rounded the keeper in the second half to score his first goal since Sept. 28 and put the home side 3-0 up.

Bournemouth keeper Aaron Ramsdale pulled off a string of fine saves to maintain his side’s advantage but there was nothing he could do to keep out Aaron Mooy’s 81st-minute pile-driver.

The win moves Bournemouth to 23 points from 24 games while Brighton are two points ahead of them in 15th position in the standings.