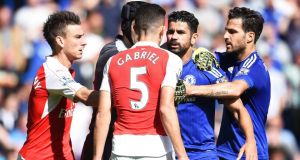 Chelsea’s Diego Costa squares up to Gabriel Paulista, an incident that saw the Arsenal defender sent off during the Premier League game at Stamford Bridge. Photograph: Andy Rain/EPA

Arsenal manager Arsene Wenger launched a scathing attack on the dirty tactics of Chelsea striker Diego Costa and labelled referee Mike Dean naive after losing 2-0 at Chelsea, where his side finished with only nine men.

The Gunners saw centre half Gabriel sent off just before half-time following a series of altercations with Costa after he had man-handled Laurent Koscielny.

Chelsea went on to win at home for the first time in the Premier League this season as Kurt Zouma headed in a free-kick from one-time Arsenal skipper Cesc Fabregas.

Any hopes of an Arsenal comeback had ended when Santi Cazorla collected a second yellow card with 11 minutes left before Eden Hazard’s late shot ricocheted off Calum Chambers past Petr Cech, returning to face his old club.

While Wenger accepted Gabriel had been guilty for not controlling himself, flicking out a backheel at Chelsea forward Costa as they returned to the halfway line having both been cautioned, there was no doubt of the main culprit.

“He can do what he wants, he stays on and everybody else who responds to him has to be sent off. I think it is unacceptable his behaviour,” said Wenger, who had earlier shaken hands with bitter rival Mourinho ahead of kick-off.

“If you look well at the pictures what he does to Koscielny before he pushes him down he hits him in the face and the throat, he always gets away with it.

“It is surprising and I don’t understand Mike Dean’s decision at all, not on the sending-off – why does Diego Costa stay on the pitch and Gabriel sent off?

“Okay I accept he has not to react at all. Gabriel is guilty for getting involved of course, he should not have responded at all, but Koscielny had no choice.

Wenger added: “We expect that kind of game and were not surprised, but you expect the referee to make the right decision.

“I don’t deny Gabriel is sent off, he deserves it, but he (Costa) goes down well.”

Asked if he felt retrospective action from the Football Association was called for, Wenger replied: “That is the least they could do, but he will do the same again next week and the week after and he always gets away with it.

“For me, it is always in provocation and he uses well the naivety of Mike Dean today.

“Look at the pictures, it tells you a lot on slow motion. Before the cross comes in he hits him.

“The fact is surprising that Diego Costa got away with what he did, that we go into half-time with a red card and he stays on the pitch.

“They (referees) are professional people, and they have to make the right decision.”

Unsurprisingly, Mourinho backed Costa, declaring his striker was “man of the match”.

“What Gabriel Paulista did to Eden Hazard is something that is allowed in rugby and not in football, and in the box it’s a penalty.

“And in the second half, I don’t know which player it was (Bellerin) but he did the same on Diego Costa. In rugby it’s fantastic, in football it’s a penalty.”

Mourinho continued: “If you want to speak about Diego Costa with me, it’s just to say he played like he has to play.

“That is why you have full stadiums, you sell to televisions around the world for millions and millions because the game has to be played like that. Okay?

“And that’s why tomorrow for what I consider comparable in terms of dedication and passion, I go to New Zealand against Argentina (in the Rugby World Cup). I go tomorrow because I love it. Fantastic, Diego.”

Asked if he was concerned over potential retrospective action, Mourinho said: “Look, I think he said before the game that I have to cope with my defeats. Tonight he has to cope with his defeat.”

Chelsea started with captain John Terry on the bench but Mourinho again played down any rift.

He said: “John Terry doesn’t need me to speak with him because he knows what I feel, what I think.

“If you want to paint a dark picture, I ask you please don’t do it because it’s not the reality. He’s in great condition and in a great situation with the manager and with the club.”