Arsenal slip back into familiar fourth with Crystal Palace draw 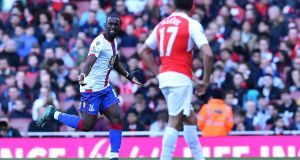 In a season in which Chelsea have imploded, Manchester City have been erratic, Manchester United have laboured and Liverpool have been in transition, Arsenal remain determined to finish in fourth. This was a microcosm of the club’s perennial frustrations – a game that they largely controlled and would reasonably have expected to win but somehow found a way to squander.

Arsène Wenger had called for a flawless final six matches from his Arsenal players in an attempt to keep alive their slim Premier League title hopes but, after last Saturday’s skittish 3-3 draw at West Ham United, they once again fell short. The weeks ahead are now likely to feature anxious looks over their shoulders as they seek to confirm a Champions League finish ahead of Manchester United. And little else.

Alexis Sánchez had brought a bit of urgency and he put Arsenal in front in first-half injury time with a goal for the third game in succession and Wenger’s team looked extremely comfortable. But they relaxed towards the end, as Crystal Palace belatedly came on strong and they got that sinking feeling when Yannick Bolasie equalised.

The boos told you who had the ball up the Palace left – the substitute, and ex-Arsenal striker, Emmanuel Adebayor – and when he played it back to Bolasie, the winger cut inside and shot low for the near corner of the net. Petr Cech looked to have it covered but he was slow to get down and across and, although he got his hands to the ball, he could do nothing more than push it into the corner of his net. It was not the way that the goalkeeper had wanted to mark his return to the team.

This fixture had been on the weekend’s undercard and it felt telling that the first chant of the 90 minutes from the Palace support related to how they were going to Wembley – next Sunday, for the FA Cup semi-final with Watford. Palace’s season is coming down to the cup because, even though Sunderland and Newcastle United won on Saturday, it would take an almighty swing to pull them down.

Alan Pardew started with Connor Wickham and Bolasie up front for Palace, which was a statement of attacking intent and he believed that the home team’s defence could be vulnerable. The visitors, actually, created little in the way of clear-cut chances but Pardew’s suspicions would prove correct.

It was Arsenal that pressed onto the front foot and, at the end of an underwhelming first-half, they went ahead through Sánchez. Wenger says that the Chilean has been more efficient” since he moved back to the right flank, as he is perhaps more predictable off the left, as he routinely looks to cut inside.

The breakthrough, though, came when Sánchez drifted towards the centre and was expertly picked out by Danny Welbeck’s floated ball over the top. With Wayne Hennessey off his line, Sanchez got there first and he looped a header into the net for his 14th Arsenal goal of the season. The move had started when Scott Dann played Mile Jedinak into trouble and he was robbed by Welbeck.

Sánchez had laid on the clearest chance of the game previously, when he sent Mesut Özil through in the 43rd minute but, under pressure, the playmaker could not work his shot past Hennessey, who blocked.

There was a talking point midway through the first-half when Damien Delaney, the Palace centre-half, had his counterpart, Laurent Koscielny, in a headlock as they contested an Arsenal corner. The focus on this sort of thing had been heightened after how the Leicester City central defender, Wes Morgan, had conceded a penalty earlier in the day against West Ham but nobody was too bothered, here.

Pardew made a change at half-time when he swapped Jedinak for Bakary Sako, moved Bolasie to the right and went to a 4-4-1-1 formation, with Jason Puncheon off the striker. On 63 minutes, he introduced Adebayor for Wickham –to predictable jeers – and, later, Wilfried Zaha for Puncheon and, eventually, he found the spark that he wanted.

Sako drew a smart tip-over from Cech after Yohan Cabaye had whipped in a corner before Bolasie manufactured the equaliser. Arsenal might have made the game safe from any one of the half-chances that they created in the second-half, with the closest they came being when Sánchez guided a flicked header from an Özil cross just past the far post. It was Palace, though, who finished the stronger.