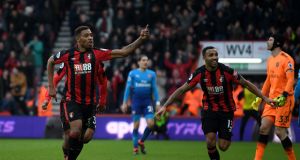 Alexis Sánchez was nowhere to be seen but this was the same old Arsenal in many other respects. A game that was totally in their control with just over 20 minutes remaining, as they led through Héctor Bellerín’s second-half goal, inexplicably slipped from their grasp as Bournemouth scored twice in the blink of an eye to pile more misery onto Arsène Wenger.

Arsenal had seemed to be coasting to victory until familiar defensive weaknesses were exposed in what has become an all too predictable story. Callum Wilson, capitalising on a mistake by Petr Cech, nipped in front of the Arsenal goalkeeper to convert Ryan Fraser’s cross for the equaliser and four minutes later Bournemouth had a second.

Once again Arsenal were their own worst enemy as Wilson, afforded far too much space in the penalty area, teed up Ibe for his first Bournemouth goal on his 46th Premier League appearance for the club.

Wenger, serving the final game of his touchline ban, could only look on from the stand with despair. Bournemouth, in contrast, were jubilant, with this first ever victory over Arsenal lifting Eddie Howe’s side up four places to 13th.

The lead up to the game had been dominated by the news that Sánchez was left out of the Arsenal squad. With both Manchester clubs targeting the Chilean and United seemingly emerging as the player’s most likely choice, Wenger admitted prior to the match that he expected a resolution “imminently”.

Sánchez’s absence meant that the onus was on Alex Iwobi and Danny Welbeck to provide some craft and guile behind Alexandre Lacazette, as was the case against Chelsea in midweek, yet Arsenal created little in a flat opening 45 minutes during which Jack Wilshere was the only player to catch the eye for the visitors.

Making his seventh successive league start after recovering from the ankle injury that forced him off in the second half at Stamford Bridge, Wilshere used the ball intelligently and dictated the game for much of the first half and plenty of the second period, too. One lovely flick set Ainsley Maitland-Niles free on the Arsenal left but the wing back ended up running the ball out of the play and that rather summed up the first half.

Arsenal were the better team, enjoying much more possession, but they only seriously threatened the Bournemouth goal on a few occasions. Welbeck, running onto Lacazette’s through ball, was denied by Asmir Begovic, who also repelled Iwobi’s deflected shot. The closest Arsenal came to scoring in that period was in the eighth minute when Maitland-Niles turned Simon Francis one way and then the other before curling a shot from just inside the area against the crossbar.

Bournemouth never really came into the game until late in that first half, when they had a decent penalty shout turned down after Iwobi appeared to handle. Moments later Calum Chambers superbly blocked Fraser’s shot after Ibe skipped away from Maitland-Niles far too easily on the Bournemouth right.

The game badly needed a goal and Bellerín provided it five minutes into the second half following a lovely passage of play. Wilshere and Granit Xhaka were involved but the key figure in the build up was Iwobi. After a neat one-two with Xhaka, Iwobi slid an inch-perfect pass inside Charlie Daniels, Bournemouth’s left wing back, who was caught flat-footed. Bellerín galloped in behind and, with the angle against him and no option to square to a team-mate, hit a right-footed shot from eight yards that Begovic got a strong right hand to but was unable to keep out as the ball looped up in the air and over the line in what felt like slow motion.

Other than Fraser’s chance towards the end of the first half, Bournemouth had offered little as an attacking force, yet that was soon about to change. Fraser, outstanding in the corresponding game last season, escaped on the right and delivered a low centre that Cech dashed off his line to try to claim. Wilson, however, got their first and poked the ball into the empty net.

Four minutes later Bournemouth had a second. Cook’s floated pass found Wilson, who had so much time and space in the Arsenal area – Rob Holding had pushed up looking for offside – that he was able to take a couple of touches before the ball fell to Ibe to drill a low shot past Cech. – Guardian service