Adam Johnson says Sunderland were aware he admitted to allegations 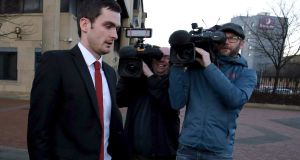 The jury at Bradford Crown Court heard that police met with club bosses after Johnson’s arrest to discuss safeguarding young people at the club.

Johnson was sacked by the club after admitting grooming and sexual activity with a child, relating to kissing.

Orlando Pownall QC asked Johnson: “Were the club aware of the allegations made against you?”

He continued: “Were they aware of the fact you accepted kissing her using tongues?”

Johnson answered “yes” to both questions, and also said the club was aware of the nature of the messages between him and the girl.

Mr Pownall added: “Have you ever sought to make a secret of that?”

Earlier, Detective Inspector Aelfwynn Sampson, of Durham Police, told the jury she went to Sunderland after the defendant’s arrest to discuss safeguarding.

She said: “The main reason for that meeting was to disclose the offences which Mr Johnson had been arrested for and consider safeguarding with any other young people he may come into contact with through his role as a professional footballer.”

The detective said Johnson had not been interviewed at that point and she did not disclose what he said in his interview to the football club.

Ms Sampson said she later received a call from the football club about apparent contact on social media between the girl and another player.

Ms Sampson said the other player had received “likes” on some of his Instagram photographs from an account in the name of the teenage girl.

Johnson told the court he had amassed “significant wealth” from his career, which has seen him receive 12 caps for his country.

Describing his life as a professional footballer, he said: “I think it’s every young boy’s dream. You get put on a pedestal, people scream your name, it’s the best thing in the world.

“But you also get everything done for you and everything’s easy.”

He added: “All your needs are catered for.”

When asked if he became arrogant, Johnson agreed.

The court also heard that a Google search for “legal age of consent” that was made on Johnson’s phone four days after he met the girl in his car on January 30th “had nothing to do with (her)”.

Johnson told the court he knew the age of consent when he asked the girl in December 2014 about when she turned 16. He said he asked the question during a conversation about drinking.

He said he searched the internet for the age of consent after a training session, but added: “It had nothing to do with (her).

“We were having a discussion in the dressing room about a programme that was on a couple of days ago about different ages and things like that.

“There are a lot of players in our team from all sorts of countries and we were having a discussion about laws and ages and things in different parts of the world.”