Dunne to make a return to action against Georgia 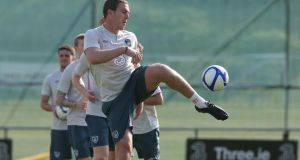 Richard Dunne is set to be handed the chance to end his year-long injury nightmare this weekend.

The 33-year-old Aston Villa defender is in line to play some part in the friendly clash with Georgia at the Aviva Stadium on Sunday in what will be his first appearance in competitive football since last June.

Should he emerge unscathed, Dunne could also find himself involved in some capacity in the following Friday night’s World Cup qualifier against the Faroe Islands at the same venue in what would represent a remarkable turnaround for one of Giovanni Trapattoni’s most dependable performers.

Asked if Dunne would figure against the Georgians, the Italian said: “Yes, sure. I have already said probably he will play some time in the game.

“Whether it’s better to start or better to play when later in the game, we will have to decide. We will speak with him, but sure he has the possibility to play.”

Dunne has not managed a single appearance for either club or country since last summer’s Euro 2012 finals because of a combination of groin and hip injuries, and has undergone three bouts of surgery in a bid to regain his fitness.

However, the former Manchester City man, who is out of contract at Villa Park at the end of next month, joined up with his international team-mates in London at the weekend and has stepped up his training in recent days to the point where Trapattoni is ready to grant his wish and throw him back into the fray.

Dunne was a spectator at Wembley last night for the 1-1 friendly draw with England, and captain Robbie Keane revealed the centre back’s desperation to return after the final whistle.

Keane said: “I know he wants to. I have been rooming with him, so I know he is desperate to play.

“It’s been a frustrating season for him. Obviously he hasn’t played since the Euros, so I know how much it means to him.

“To come back and hopefully even play 20 minutes or something like that would certainly be good for his confidence, and to see where he is himself because it’s been a tough year for him with his injury.

“It’s not nice to be out, certainly for that long. I have been very lucky in my career never to be out for any more than four or five weeks, so I could never imagine what it would be like to be out for a year. I’d be pulling my hair out.”

Left back Marc Wilson, who missed last night’s game with a calf problem, will be given a chance to prove his fitness ahead of the Faroes’ visit to Dublin, although there will be no place for key midfielder Glenn Whelan, who will be rested ahead of the qualifier.

That will leave at least one vacancy in midfield with Trapattoni indicating he will make changes, and that could mean a rare opportunity for Norwich’s Wes Hoolahan, who was among the unused substitutes at Wembley.

Asked if he would be involved, Trapattoni said: “I have to think again. Probably, yes, probably. But we have to think again because we have also [Jeff] Hendrick. Whelan will have a rest because it’s important for Whelan to have a rest before the Faroes at this moment. He has had a very tough season. But Wes could be, sure, one of the two midfielders. Could be.”

The squad reconvened at their Malahide training base this afternoon with several nursing knocks, although Trapattoni is hopeful that all are minor problems.

He said: “Whelan is one and there are another two or three, but we will get a clearer picture later in this evening.”

Goalkeeper David Forde joined the men who played against England in a gentle stroll around the training pitch with his right knee bandaged, although Trapattoni later suggested that deputies Keiren Westwood and Darren Randolph could both be involved on Sunday.