Darren O’Dea makes his own case for the defence 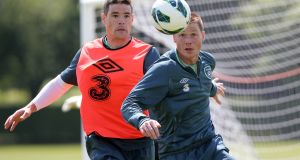 Damien Delaney will add to Giovanni Trapattoni’s stash of defenders with a story to tell when he joins up with the Republic of Ireland squad today. The 31-year-old will probably be as tired as jetlagged Dubliner Darren O’Dea but might provide some inspiration to Seán St Ledger who Leicester would like to offload. He has more chance of featuring back at Wembley tomorrow night, meanwhile, than Richard Dunne or Marc Wilson, both of whom continue to struggle with injury.

Delaney’s yarn isn’t half bad, though, with the 31-year-old having toyed with giving the game up not so long ago when he was let go by Ipswich. Instead, he helped Crystal Palace back to the Premier League yesterday with a cracking performance that will add to the scale of Trapattoni’s dilemma in defence ahead of the England game.

Wilson looks certain to miss out with a calf strain while Dunne will not be risked in what Marco Tardelli suspects will be an especially gruelling friendly because of its particular status to the Irish.

O’Dea is dividing himself between club and country this week which may just take its toll and St Ledger is immersing himself in the international programme after having been told by Leicester City that he should seek alternative employment. Spare a thought for John O’Shea whose tales of life under Paulo Di Canio probably struggle to find an audience just now.

The Sunderland defender is at least fairly sure to start against England but may be as deeply in the dark as the rest of us as to who his defensive partner is likely to be. The manager has options but O’Dea certainly can’t have done himself any harm by making such an effort to travel.

Miss out
Because the date of tomorrow’s game does not fall into a recognised Fifa window O’Dea might have been expected to miss out but that, he says, is something he made sure would not happen when he went to Canada in the first place.

“Before I ever spoke to the club about money or anything else,” he said yesterday, “the first thing I spoke about was international football . . . I said before I went to the club internationals are the pinnacle of anyone’s career.

“So, they had no say (about him travelling), it was up to me. Every time internationals come around they’ve no say.”

O’Dea wanted a clause put in his contract to this effect but says that he settled instead for being given the word of the people he was negotiating with and while he has struck various deals with the MLS outfit since, such as the one to miss the Poland game or travel back this Thursday so as to play for his club at the weekend, his is the final say on the matter.

It’s an impressive show of loyalty by a player not nearly as assured of a start as skipper Robbie Keane and with no record to break.

There is, however, the fact that O’Shea’s switch to the centre has left just one other spot to fight over and with the return of St Ledger and, hopefully, Richard Dunne, O’Dea would probably not want to fade in the manager’s memory.

St Ledger’s issue, meanwhile, is a familiar one with the 28-year-old seeking a distraction on one hand and to catch a manager’s eye over the next couple of weeks on the other.

“I am surplus to requirements at Leicester,” he says, “and they’ve said I’m not going to play too much next season and yeah, to try and find a new club.

“I have another year and have to wait and see what happens. I’m happy at Leicester and wouldn’t want to leave but when you are told you can then sometimes you have to accept that. I haven’t played much for the last two seasons and I’m 28 now, I want to play as much as I can week in, week out and if that’s not going to be the case you have accept that and move on.”

St Ledger hasn’t been helped this year by an injury that sidelined him for several months but a loan spell at Millwall got him playing again and he might have been expected to push on next season.

Instead, Nigel Pearson, with whom he previously fell out, has decided to try to move him on as he seeks to rebuild for another crack at promotion after they narrowly and dramatically missed out on a place in yesterday’s play-off final.

Walk away
Still, it remains to be seen whether there is the sort of offer that would tempt the defender to walk away from the remainder of his deal.

“I really like the manager, I think he’s done a good job and maybe towards the end, he had a lot of young players. I’m sure the play-off experience will stand to them and next season will be a lot stronger.

“I’ve never seen anything like it to be honest,” he continues. “I saw the Brentford game (when the London club missed a penalty but Doncaster broke and scored a goal that clinched them automatic promotion and consigned their opponents to the play-offs) and didn’t think it could happen again. But one minute we were going to Wembley, the next we were going home. It was horrific to be honest. (Now) I just want to go somewhere and just play regularly to be honest. I’ve not played enough in the last two years. That’s all I ask for.”

The FAI has announced details of the new international season tickets for 2013/14. Prices start at €124 for adults, €49 for under-16s and €299 for families. The tickets cover five international dates including the home games against Sweden, Kazakhstan and, possibly, a play-off game. The FAI Cup final and a number of women’s international games are also included. Details are at fai.ie.