Clark coming of age for club and country 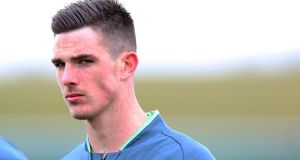 It doesn’t seem like so long ago that Ciarán Clark was viewed as an inexperienced but versatile squad player at Aston Villa.

The promise was always apparent but opportunities to deliver on it were sometimes short-lived, with the duration of his spells in the team, often at left back or central midfield, depending on the seriousness of the injury suffered by someone higher in the manager’s pecking order.

Now, the London born defender is at the very heart of Villa’s battle for Premier League survival and even he seems a little bemused at just how much things have changed.

“We’ve got a fairly young side,” he says, “and a young squad and being one of the more experienced members at 23 is probably a big responsibility for me. We’re a good team, though, and hopefully if we can come through this season, all the young lads will be better for it in seasons to come.”

Difficult campaign
Paul Lambert has certainly suggested that Clark will benefit from the experience, not all good, that he has amassed over the course of what has been a difficult campaign at Villa Park.

His team hasn’t kept a clean sheet since the scoreless draw with Stoke on December 8th and 17 of their last 19 games have produced at least three goals; some quite a few more.

During that time Clark has looked a little overwhelmed at times, but then it would be something approaching a miracle if he had not.

And yet with Ron Vlaar, when fit, struggling to adapt to the rigours of the English game and Richard Dunne, who tends to thrive on them, looking set to miss the entire season, he has somehow emerged with a good deal of credit.

The former England youth international has, he acknowledges, ended up benefiting from the misfortune of Dunne, the man who helped recruit him to the Irish cause.

“I think the more games you play, the more you learn and develop as a player. The more I can keep playing, the more I learn and the better than I come.

“It’s not nice when you get your chance through players getting injured but lads need their chance at some point and you need to take it when you get it.

Experience
“Richard has been a big miss for us and we could have done with his experience especially in a young side. But we’ve done alright. We can do it now.”

The way in which he worked with John O’Shea last month against Poland may well have convinced Giovanni Trapattoni that Clark is worth sticking with despite the return of his other half of what his first choice pairing, Seán St Ledger.

Clark threw himself into the game, making some key challenges, building on what has looked a decent understanding with the vastly more experienced but less energetic O’Shea and even getting his first senior international goal.

“We did quite well together and we’ve had a couple of games now. The more games you play together the more you get used to each other, how the other works.

“We have trained enough (but) it’s one of them things, you get on the pitch and do your best to keep it tight. Fortunately that night we came away with a clean sheet.”

Camaraderie
His ongoing experience of the backs to the wall camaraderie at club level might well end up standing to him in Stockholm but Clark has a rather more positive take on the similarities between the two set ups.

“There’s a similar feel to it,” he says.

“At Villa, there are a lot of young lads who have come through at the same time and progressed into the team together and a similar thing has happened with Ireland.

“There’s a lot of fresh faces, new lads coming and that can only be good for everyone and Ireland as a whole.

“Hopefully, for the next few years, it can be a positive thing.”

Attention
It is, of course, the next few days that most people are focused on now and much of the attention this Friday night will focus on how Clark and co cope with Zlatan Ibrahimovic.

He is not, it’s fair to say, wildly specific about the game plan although he appreciates the scale of the task.

“They’re a top class side with world class players including Ibrahimovic.

“He’s a world class player and on fire (for PSG). He has scored a lot of goals but,” he insists, “we’ll deal with him.”

1 Gordon D’Arcy: the next fear for Irish rugby is England in Twickenham
2 David Moyes discovered positive test an hour after arriving at London Stadium
3 Seán Moran: Fallout from Tyrone final celebrations will concern GAA
4 Pro14 teams need private planes to keep show on the road
5 How Dundalk’s opponents Sheriff started on the wrong side of the law
Real news has value SUBSCRIBE
Crossword Get access to over 6,000 interactive crosswords