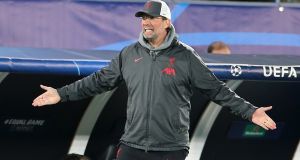 Jurgen Klopp: We switched back to Madrid to watch Klopp adjust his spectacles, at the same time Haaland was setting Marco Reus up for Borussia Dortmund’s equaliser in Manchester. Photograph: Isabel Infantes/PA

Nobody would ever want to underestimate the gruelling multitasking challenges that have, in the last year, faced those of our fellow citizens who have had to combine working from home with, say, child-minding, home-schooling, dog-walking, grocery shopping, food-cooking, general household chores, Netflix-binge-watching, sourdough-baking, shed-painting and decluttering.

But all of that, to be honest about it, paled next to what football fans had to endure on the multitasking front come Tuesday night: Watching two clashing Champions League quarter-finals.

Quite why Uefa couldn’t have staggered Real Madrid v Liverpool and Manchester City v Erling Haaland, we will never know, it’s not like we had pubs or restaurants or gigs or the cinema or hair salons or tattoo parlours to be going to.

And lest that wasn’t enough to be getting on with, Tommy only went and told us that Dave McIntyre and Gerry Armstrong were hosting Madrid v The Scousers over on Virgin Extra Media Sport Media Virgin Extra-36-Something-Or-Other.

If you were so inclined, you’d be tempted to send a strongly-worded tweet of complaint to Uefa, or even ring Liveline on Wednesday afternoon (“I’m frazzled Joe, frazzled.”).

For Andrews, though, the night might have come as a welcome relief after the recent international break when he assistant-coached Ireland to those results he and we would very much like to forget.

Tommy was ruthless, though, kick-starting Virgin Media’s coverage by asking Keith to reflect on losing to Serbia and Luxembourg, before drawing with Qatar.

The draw with Qatar?

“I thought it was a proper performance filled with character and resilience,” he said. He was talking about our lads, not Qatar. Keith is the kind of man who would see an empty glass and conclude ‘hmm, that looks half-full-ish to me’.

Anyways. How did the multitasking go?

The Duffer was a bit sheepish come half-time, having said pre-match that: “I fancy Liverpool massive to go through” – both he and Richie conceding that Madrid would hardly be trembling in their boots at the prospect of the return leg in Anfield because The Kop would only be populated by weeds.

So annoyed by Trent Alexander-Arnold’s first half display was The Duffer, he de-double-barrelled him, referring to him, in an exasperated kind of way, only as “Arnold”, never once mentioning the most interesting fact in footballing history, namely that Trent’s granny was Alex Ferguson’s first steady girlfriend.

Second halves. Some of us were watching Ilkay Gundogan urge Joao Cancelo to overlap a touch more from his left-back station when Mo Salah pulled a goal back for Liverpool, before then watching Joao Cancelo tell Ilkay Gundogan where to stick his overlapping when Vinicius Jr made it 3-1 for Madrid.

All the while, Haaland was failing to trouble the City net, leaving us wondering if he can’t do it on chilly April night in Manchester, were his 20 Champions League goals in 14 games but a mirage?

Back to Madrid to watch Jurgen Klopp adjust his spectacles, at the same time Haaland was setting Marco Reus up for Borussia Dortmund’s equaliser back in a chilly April night in Manchester. We only knew this because of what they call notifications. In all, then, that was six Champions League quarter-final goals, not a single one of them seen live.

Hold it. Make that seven. When Phil Foden scored City’s winner, some of us were watching Andy Robertson scratch his left bottom cheek.

All to play for in the second legs, but before then, please visit YoUefaPleasePleasePleaseStaggerCLKnockOutGamesThanks.com.