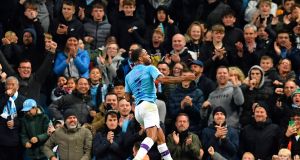 On a night of firsts for Manchester City, they could savour Raheem Sterling’s maiden Champions League hat-trick.

If the only red card of Phil Foden’s career was a footnote, a superlative display by Sterling, who epitomises Pep Guardiola’s quest for perpetual, exponential improvement brought another milestone in his development.

It was all the more remarkable as it came in 11 minutes and as he had already played a part in City’s first two goals. They scored five to give them a five-point lead in Group C. It was quite a turnaround after trailing to Atalanta. If Sergio Agüero’s double gave City a further reason to be relieved he escaped unhurt from a car crash last week, even he was overshadowed by Sterling.

Atalanta’s only previous game in England brought a 5-1 win. If there was scant chance of a repeat of that 2017 thrashing of Everton, there is an ambition to their approach that Guardiola admires.

Robin Gosens, who scored at Goodison Park, found space on the left flank and crossed for the opposite wing back Timothy Castagne to head over. It was an early reprieve for City but nevertheless illustrated why Atalanta are Serie A’s top scorers again this season.

While they began without their two most prolific players, with Duvan Zapata injured and Luis Muriel benched, Josip Ilicic, who was deputising in attack, drew a save from Ederson with a low drive and won a penalty.

He was fouled by Fernandinho, with City’s stand-in captain perhaps betraying his status as a midfielder by getting his geography wrong and fouling the Slovenian just inside the box. Ruslan Malinovskyi sent Ederson the wrong way.

It highlighted the problems of picking players unaccustomed to such defensive duties. However, perhaps it was more of a surprise that City began without a Silva than they started minus a specialist centre back. Fernandinho and Rodri reprised their partnership at the heart of the defence until the Spaniard hobbled off, seemingly hamstrung, just before half-time and Guardiola brought on John Stones, more of a stylish stopper by trade.

But, with both David and Bernardo Silva among the substitutes, Guardiola selected a man with only 11 minutes of Premier League football to his name this season. Foden had scored with virtually the last kick of City’s previous Champions League game and he began this. Much as Guardiola trumpets the teenager’s talent, he rarely selects him for particularly meaningful matches.

Shorn of the Silvas, City nevertheless had two champion players who turned the game around within seven minutes. Sterling and Agüero had been on different wavelengths before Atalanta scored; when City trailed, they connected swiftly and decisively.

Sterling had failed to find Agüero when the striker lingered in the six-yard box for a tap-in earlier, but did pick out his sidekick by chipping a cross to the far post. The striker extended his right foot to apply a deft finish. It was his 60th goal in continental competition and a 61st soon followed. Agüero dispatched the penalty after Sterling was upended by Andrea Masiello. At least the Italian defender, already booked, was not shown a second yellow card.

Atalanta’s response was to remove Masiello and send for Muriel. Perhaps, after losing their first two games, Gian Piero Gasperini figured he had to be bold in a bid to salvage something.

An increasingly open game offered opportunities to extend a lead and City duly took three, as Sterling claimed a swift treble. Kevin De Bruyne, who had been denied by Atalanta goalkeeper Pierluigi Gollini a couple of minutes earlier, powered clear on the right, left Rafael Toloi on his backside with a sharp turn and found Foden. Guardiola was irritated that, in a similar position against Crystal Palace on Saturday, Gabriel Jesus did not pass. The youngster was more unselfish, squaring for Sterling to lift the ball into the roof of the net. It was the sort of decision-making his manager appreciates.

Sterling’s potency was illustrated again when Ilkay Gündogan provided a defence-splitting pass. Sterling raced on to it, skipped inside and defeated Gollini at his near post. A goalkeeper who had spent two years on Manchester United’s books as a teenager was beaten for a fifth time when, after he had saved from Agüero, Riyad Mahrez crossed and Sterling touched in his third goal.

Sterling should have had a fourth, rolling a shot wide after Foden released him. It was a rare act of mercy but he nevertheless left Atalanta pointless and at the foot of the pool. The referee Orel Grinfeld could not show any compassion to Foden who was already booked for fouling Malinovskyi when he tugged back Marten De Roon. A second yellow card was inevitable and, like Rodri’s injury, represented a blight on an otherwise excellent occasion for City. – Guardian