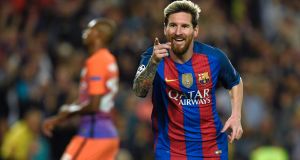 Pep Guardiola had been asked on Tuesday how he might stop Lionel Messi. The Manchester City manager simply laughed. There is no way to stop one of the all-time greats, as Guardiola himself knew better than anyone from his four years in charge at Barcelona, and the Argentinian re-emphasised the point to make this a difficult homecoming for his former manager.

Messi’s hat-trick came courtesy of three sumptuous swipes of that left foot and the latest statistic to laud his genius shows that he now has 16 goals in 15 games against English clubs. In truth, he has been punishing all-comers for as long as anybody cares to remember.

Guardiola felt that this daunting assignment would offer a decent gauge of the progress of his City team and, despite Messi and despite the scoreline, there were some positives to take. He was extremely adventurous with his tactics, which took in the headline decision to omit Sergio Agüero from the starting XI, in attempt to get an extra body in midfield and he watched his players work the Barcelona goalkeeper, Marc-André ter Stegen, on a number of occasions.

But City were undermined by crass errors, from the slip from Fernandinho that prefaced Messi’s first goal to the faintly comical way that Claudio Bravo got himself sent off for a deliberate handball outside his penalty area. There was also Ilkay Gündogan’s loose pass to Luis Suárez, which led to Messi’s hat-trick goal. This Barcelona team does not need any assistance. After the draw at Celtic in their previous Champions League tie, City find themselves under pressure.

City had arrived as the team to beat in England. The Premier League leaders had not won in their previous three fixtures in all competitions but it felt as though the ‘mini-slump’ had been overplayed. They had played well enough against Everton last Saturday, when Agüero had also been a substitute.

They entered the lion’s den, here. The scale of the challenge had felt intimidating. Never mind that Barcelona sit fourth in La Liga – a sentence that ought to end with a series of exclamation marks. They have felt like the team to beat in Europe for some time. They had won 16 of their previous 17 Champions League ties at home and drawn the other one.

The tactical nuances, mainly from Guardiola, underscored the occasion. His starting formation could best be described as 4-1-4-1 but when City had the ball, Pablo Zabaleta, the right-back, stepped up and inside into midfield, alongside Fernandinho. John Stones, the central defender, was encouraged to step up and so were the midfielders, Gündogan and David Silva.

It felt as though long spells were spent attempting to decode it all, and the ever-evolving City formations served to ask searching questions of Luis Enrique. Then again, the Barcelona manager has Messi and, on 17 minutes, Messi opened the scoring.

Fernandinho was the favourite to get to the ball ahead of Messi, after it had squirted loose following Stones’s challenge on Andrés Iniesta. Guardiola’s approach was utterly meticulous but he cannot be relied upon to check whether his players are wearing the correct studs.

Messi’s finish, obviously, was marked by class and composure. Twice he took touches, as he feinted to shoot and, when Bravo could stand tall no longer, he rolled the ball home with his left foot. The move had started when Javier Mascherano bulldozed into Aleksandar Kolarov to win possession.

Barcelona decorated the tie with sumptuous touches, individual moments from Neymar, among others, that might not have led directly to anything but they certainly enhanced the spectacle, firing the sense of theatre.

Luis Enrique had to use two of his substitutions by the 39th minute and there was anger in Barcelona ranks about David Silva’s lunge at Gerard Piqué that eventually forced the centre-half off. Jordi Alba had felt something twang early on.

Barcelona had chances in the first-half to add to their lead. Suárez found the side-netting with a shot; Ivan Rakitic headed over from Messi’s free-kick and Bravo had to back-pedal, leap and tip over his own crossbar, after he had only half-saved a shot from Suárez.

But City had their moments in a purple patch before the interval; flashes when they got in behind Barcelona and their hosts were right to worry. Guardiola could enjoy a dividend from his elaborate attempts to win space. Silva played in Nolito, working off the left and Ter Stegen had to make a regulation save. Minutes later, the Barcelona goalkeeper was extended fully by Gündogan, after he had skipped past Piqué. It was a wonderful save. And, on 45 minutes, Stones headed wide of the near post from Silva’s free-kick. He had to hit the target.

Guardiola’s fingerprints are all over City already; Luis Enrique had described his impact as having been “brutal” and, by that, he meant, extreme. City tried to play short and cutely in every corner of the pitch. It was Barcelona, not them, that were prepared to be more direct.

One well-publicised detail has been Guardiola’s insistence on having a ball-playing goalkeeper but Bravo, the former Barcelona player, came unstuck in what could only be described as brutal fashion when he ventured outside his area. He tried to play a little pass to Fernandinho but he found only Suárez. Big mistake. The next error came when he instinctively saved Suárez’s subsequent attempted lob with his hands, while still outside his area. The referee, Milorad Mazic, had no option but to reach for his red card.

Messi scored his second when he jinked and threaded a low shot into the corner from the edge of the area and the third followed Gündogan’s aberration and Suárez’s assist. Neymar added the fourth, after dancing and shooting, having only just seen a penalty saved by the City substitute, Willy Caballero, after Messi had been fouled by Kolarov.

For City, Kevin De Bruyne and Kolarov extended Ter Stegen in the second half while the Barcelona substitute Jérémy Mathieu’s dismissal for a second yellow card was a mere footnote.

My favourite sporting moment: Roscommon minors restore pride to a county 06:30
Women’s sport gets the conversation started on pelvic health 06:30
Harry McNulty: Seeing the world, from Sevens to dog-sledding 06:00
Pro14 nations could miss out on €15m in TV revenue if league is not completed 06:00
Italian Olympic 800m finalist Donato Sabia dies from Covid-19 aged 56 20:16