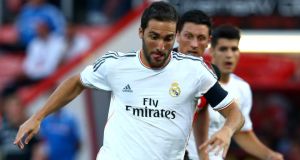 Gonzalo Higuain and Jose Reina have passed medicals at Napoli and will be presented to the ambitious Serie A club’s fans on Monday night.

Real Madrid striker Higuain (25) is on the verge of signing a reported five-year contract at the Stadio San Paolo for a €40 million fee while Liverpool goalkeeper Reina (30) prepares to reunite with his former Reds manager Rafael Benitez on a season-long loan deal.

Through his official account, he wrote: “Higuain and Reina have passed their medicals and will soon join the rest of the group. On Monday there will be a big party at the San Paolo. You will be able to get to know the new players and the new shirts.”

Should the moves go through, Higuain and Reina could appear for Napoli against Arsenal in next month’s Emirates Cup.

The pre-season event is being hosted by the Gunners, who have been strongly linked with a move for the Argentinian striker this summer, on the weekend of August 3rd-4th. Porto and Galatasaray will also contest the mini-tournament.

A report published on Gazzetta.it today showed Higuain, who has scored 107 league goals in six seasons with Real, wearing a Napoli scarf while being mobbed at Rome’s Fiumicino airport.

Meanwhile, Reina’s agent Manuel Garcia Quilon told Gazzetta.it: “He’s happy to reunite with Benitez because he’s known him for over five years from their time in Spain and England, and they worked very well together.”

Higuain declared his intention to leave the Santiago Bernabeu towards the end of the 2012-13 season, while Spain international Reina’s chances of first-team football at Anfield appeared increasingly limited following the arrival of Simon Mignolet from Sunderland.

Napoli have already signed winger Dries Mertens from PSV Eindhoven and both forward Jose Callejon and defender Raul Albiol from the Spanish capital club as the Serie A runners-up rebuild for a title challenge by reinvesting the reported €64 million earned from striker Edinson Cavani’s transfer to Paris St Germain.