PSG trying to adjust to life without Zlatan Ibrahimovic

Unai Emery tenure off to a slow start without talisman 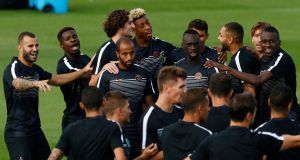 PSG are getting used to life without their talisman Zlatan Ibrahimovic. Photograph: Reuters

How do you fill a hole that’s Zlatan-shaped? This is only the most pressing of questions facing the manager Unai Emery as Paris St-Germain prepare to kick off another Champions League campaign when they welcome Arsenal to the Parc des Princes.

As Premier League fans are beginning to realise, Ibrahimovic occupies a lot of space. His 113 goals in 122 games over four seasons in Paris were comparable only to Messi and Ronaldo. He provided a focal point for everything PSG did on the pitch and was their icon off it. He turned them from a club desperate to enter the inner sanctum of European football to one that had the old guard looking nervously over their shoulder. One could even stretch the point further and suggest he put French football itself back on the map. And now he has gone.

He was certainly missed on Friday night as PSG’s shocking start to the season continued, by their recent standards at least. A dour performance at home to St Etienne made visible a lack of both a focal point in attack and confidence in the team. Yet still it looked as if the champions would earn three points after the visiting full-back Kévin Malcuit brought down Blaise Matuidi in the box and Lucas Moura converted the penalty. In seasons gone by this would have been the platform for a regulation 1-0 win. But with the final minute of added time under way, Malcuit popped up at the opposite end of the pitch and crossed for Robert Beric to chest and volley home.

A shocking start for PSG still means seven points from a possible 12 but, when winning the title has become a given and the only live topic of conversation is the margin of victory (31 points last season), achievement is measured differently in the French capital. Quite simply, Laurent Blanc won every domestic trophy but was still sacked by the club’s Qatari owners because he couldn’t crack the conundrum of winning the Champions League. Emery is a back-to-back-to-back Europa League winner and was hired for his continental experience, but finds himself under siege before the competition has even begun.

During a bristling performance at his pre-match press conference on Monday, in which he reverted to speaking in his native Spanish, Emery asked for patience. “I’m the coach. So, when we win matches, there are positive press and when we lose there is criticism,” he said. “That is always the case. I’m also very self-critical and learn a lot as well from this process of self-criticism. That’s always been the case. I focus on the work I have to do in terms of patience and precision in my work.”

Emery was perhaps the hottest coaching property on the continent when he swapped Seville for Paris, but while his coaching abilities are not in doubt, this job will put him under far greater scrutiny than he faced in Andalucia. Fans are complaining about a loss of identity and the media are suggesting players are struggling to adapt to the new coach’s tactics.

The Spaniard can surely claim mitigating circumstances. Not only must he make do without an icon, he has also lost the club’s second most recognisable name in David Luiz. Emery admitted he had wanted to keep David Luiz. “Like all of the other big-name players, I wanted him to stay here”, he said. Emery has struggled to get the big names that remain on the pitch. Thiago Silva is yet to play this season through injury while Edinson Cavani is only now being reintroduced into the side. The key summer signing Grzegorz Krychowiak, meanwhile, made his first appearance of the season on Friday as a substitute.

The same applies to Jesé, the £20m signing from Real Madrid, saddled with the onerous burden of replacing Ibra. Some eyebrows have been raised over the price for a player who made just 14 league starts in three seasons for Real. Emery knows the Spaniard from La Liga and sees him as a player with massive potential. But this unfinished product went on record this week to insist that he sees himself as the club’s No9, ahead of Cavani. “Cavani is a great player, but I am no substitute,” he told Le Parisien. “I come here with the desire to play in every game.”

Such provocations and challenges are the norm at a big club. And Emery still has a talented squad to work with, one that includes the emerging French talents of the defenders Presnel Kimpembe and Layvin Kurzawa, along with the forward Jean-Kévin Augustin. Cavani, Krychowiak, Ben Arfa and even Silva could start against Arsenal. But Emery has endured a tough start to his new job and, when expectations are this high, only Champions League victories will make things easier.

1 Tour de France: Every yellow jersey winner must feel guilty by some association
2 Ken Early: Handball ‘crisis’ a timely distraction from the grim bigger picture
3 49 and out for Corofin as their long Galway reign is ended
4 GAA Championships await and we need a button for the buzz of the crowd
5 More fireworks on club scene as Corofin’s long Galway run ends
Real news has value SUBSCRIBE