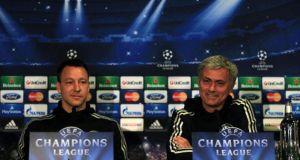 Chelsea manager Jose Mourinho has confirmed Petr Cech is not in contention to play Wednesday’s Champions League semi-final second leg with Atletico Madrid, despite sending the goalkeeper out to training on Tuesday morning in a show of togetherness.

Cech took part in training on the eve of the contest a week after being ruled out for the season by Mourinho with a dislocated shoulder sustained in the first leg.

Cech departed after 20 minutes of last Tuesday’s first leg, which finished 0-0, to be replaced by Mark Schwarzer, who is poised to continue in the second leg.

“Everybody’s ready and he’s ready and that’s the message we wanted to give,” the Portuguese said. “Everybody was on the pitch.

Captain John Terry (ankle) was also present in training, having initially been ruled out up to the May 24th final in Lisbon, while Eden Hazard (calf) and Samuel Eto’o (knee) were also present after recent absences.

As well as playing for a place in the Champions League final and a third European final in three years, the Blues are in contention for domestic silverware.

The London side won 2-0 at Liverpool last weekend to keep themselves in with a chance of the Premier League title, albeit a slim one with two games to play.

Mourinho’s defensive tactics were criticised, among them by Liverpool boss Brendan Rodgers, who accused Chelsea of “parking two buses”.

“Pundits are pundits and I don’t want to comment a lot,” added Mourinho, who employed Rodgers at Chelsea during his first spell.

“Brendan is a manager and is somebody that I consider my friend.

“I met him a long time ago when he was a very young coach coaching kids and I consider him a friend.

“I prefer to forget the words after the match and I keep the words of today.”

Mourinho confirmed Terry, who was sitting to his right at the pre-match media conference at Stamford Bridge, will start against Atletico and believes his skipper deserves more from the Champions League after a challenging history.

Terry missed the decisive penalty in the 2008 final loss to Manchester United in Moscow, was absent for the 2012 win in Munich through suspension and was injured for last season’s Europa League final win in Amsterdam.

“I think he deserves more than the Champions League gives to him till now,” Mourinho said.

“He won a final, also in special circumstances, because he couldn’t play the final. I think Champions League owes him something.

“Six or seven years later he is playing at his best level. It’s fair to say that.

“It’s also fair to say that the people that surround him are playing also fantastic.

“I think his partnership with (Gary) Cahill is fantastic and people that work together in the same areas – they are doing a fantastic job.

“I’m really happy to see a player like him, six or seven years later to be back to the same level.”

Terry feared the worst when he went off midway through the second half of the first match, forcing him out of the trip to Anfield, but now he is fit and raring to go.

“After I went down, I knew it was something a bit more serious,” the 33-year-old said. “After the game I wasn’t feeling great about it and the scan (told) me it wasn’t great.

“Myself and the physios gave it everything over the weekend and on the Sunday I went out and trained with the boys who stayed back (from Liverpool).

“There’s nothing bigger than the Champions League and I’m always determined.”

Terry confirmed he is in discussions to extend his contract, which expires at the end of the season.

“Clearly, I want to stay for the rest of my footballing days,” he said.

“At the minute we’re in talks and it’s ongoing. I’m hoping it gets done. It’s down to the club. They know I want to stay.”

Terry is unconcerned by the criticisms of Chelsea’s style.

“When you win football matches, believe me, as a footballer, that’s what you’re out there to do and there’s no better feeling,” he said.

Terry’s form this season has led to numerous calls for him to come out of international retirement and make himself available for England at the World Cup.

“I think this season’s gone very well personally for myself,” said Terry, who quit international football amid the Anton Ferdinand race row.

“I certainly wish the England side and Roy (Hodgson, the England manager) the very best.”