Mascherano recalls a tackle that changed his career

Arsenal and Barcelona face off in the Champions League on Tuesday 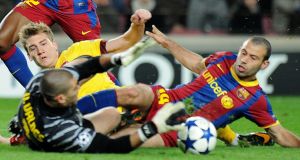 A central defender is born. The tackle on Arsenal’s Nicklas Bendtne (left) by Javier Mascherano. The rest is history. Photograph: Getty Images

Javier Mascherano has a confession to make: Nicklas Bendtner changed his life. It was March 2011, the Argentinian’s first season at the Camp Nou, and he feared it might also be his last.

Barcelona were leading Arsenal 4-3 on aggregate in the second leg of the Champions League last-16, the same stage at which they meet on Tuesday.

The clock showed 90 minutes, and Barca were going through. Then, suddenly, they found themselves watching in horror as it threatened to slip through their fingers.

Arsenal had not had a shot on target when Jack Wilshere put Bendtner one-on-one with Victor Valdes. Score and Arsenal would go through; Barcelona would be out.

Bendtner took a touch, a little wide, and from nowhere a figure slid past and took the ball from him.

Mascherano made the tackle, Arsenal went home, Barcelona went on to win the European Cup, and Mascheranohe a career in Catalonia. Had Bendtner scored it might have ended there. As he puts it “that tackle marked a before and after”.

“Honestly, after five, six months I thought it was unlikely I’d be here long: my characteristics seemed to go against everything Barcelona stood for. That moment marked me. If Bendtner had controlled the ball and gone the other way, he’d have got away from me, and I don’t know what would’ve happened.

“But it happened the way it happened, and we ended up winning that Champions League. Things worked out well.”

Well? Mascherano has won 13 titles at Barcelona, including three leagues, two Champions Leagues and two Club World Cups. He has been an undisputed starter through five years of success, playing 265 games as a central defender.

“I’ve always refused to give up. You think ‘if I’m not playing at West Ham, how am I going to play for Liverpool when they already have Gerrard and Xabi Alonso?’ But I took that as a challenge, and it was the same when I joined Barcelona.

“But it was hard and [by then] I knew I wouldn’t take Sergio Busquets’s place. Impossible, impossible. Think of another player anywhere who could do what Busquets does for this team? There isn’t one. It was hard to see myself having a long stay here.”

That night, though, something shifted. Mascherano’s position, in particular. If he could not take Busquets’s place he would have to take a place somewhere else. He had never imagined himself as a defender but changing position changed everything.

“I found my position and I’ve been there all these years, trying to keep my place and keep this level. Until when? I don’t know because Barcelona demand a lot and have the possibility to sign whoever they want.”

The search for a centre back remains a constant but so does he. Mascherano embraced the change. He says he had not looked for a way out; it is more that he wondered if Barca might look for one on his behalf.

“After all, where do you go from here? It was worth it because I’m playing for one of the best teams in the world, with the chance to win titles. And I see football as a collective sport, not an individual one.

It is easy to see how he adapted where others might not, to spot both the humility that helped him integrate and the leadership that had already earned him the nickname Jefecito – “Little Chief” – to understand why team-mates insist he is the future manager in this team.

“Playing at coach is very easy; actually doing it is another thing. Put yourself in the coach’s position and you’ll see how complex everything is. But I’d like to try.”

Where? At a small club?

And then Europe? “Well. “I don’t know about that; I don’t know if I’d have what it takes. I thought it was unlikely I’d be here long: my characteristics seemed to go against everything Barcelona stood for.”

But he did adapt. “Being a centre back for Barca is not like being a centre back for any other team. The areas you inhabit are very similar to those I’d inhabit playing in midfield. Often, in terms of where we press, Busquets and I are practically in the same line. If you make me defend in my area the whole time, then obviously I’m going to suffer because of my physical stature, but we don’t. The [biggest] thing that changes is that I receive the ball facing the pitch, not with my back to the play.”

Mascherano once insisted that the 90 minutes are for suffering, all the more so as a defender, but now he says “I enjoy it”.

However, he adds: “Look, one day I won’t play for Barcelona. I’ll go and play somewhere else, and I’m sure I’ll do so as a central midfielder. That’s what I’ll try to do because it’s the position I like. Circumstance dictates and because of my desire to keep playing here I adapted. I like centre back but midfield is the position I chose to make my career.”

Where then? What if Pep Guardiola calls, for example?

A return to the Premier League is possible, though. He talks fondly of Anfield and even feeding the ducks in Sefton Park. He hesitates when asked if Busquets-Iniesta-Xavi was better than Mascherano-Gerrard-Alonso. “We had a good time and played some very good football. Supporters still remind me of it.” Nor would that Liverpool connection preclude a move elsewhere. “My feelings for Liverpool don’t mean I’m tied to them. I have a lot of affection for them and always will have, but if in the future a Premier League team gave me a chance you can’t say ‘no, I’d only play for one team’.

“Liverpool were one of the best teams I played for [but] the club had problems. I never met the owners. Liverpool’s a club to enjoy, to be there, to live. It’s not worth owning Liverpool 20,000km away; it belongs to the people, and you don’t get that if you’re never there. It’s a pity.

“I always felt the club was trying to take a step forward but couldn’t. Now with Klopp they’re trying. He’s a manager for Liverpool – very much of the people. Nowhere has anybody treated me so well. I was sad that I had to go the way I did.”

“What happened is what had to happen. They promised me that if there was a good offer they’d release me because the club was in a process of disintegration. But [then the club] didn’t always tell the truth; it’s the player whose image gets damaged. The same happened to Fernando [Torres], but things were clear: I never lied.

“When Rafa [Benitez] went they knew I’d leave. I felt the project was falling apart. Rafa had gone, there was no direction.”

He pauses. “And the offer was Barcelona.”

And now Arsenal in the last 16, memories of the day it all changed for him. Memories of frustration for Arsenal – that familiar hurdle at which they always fall.

Not always, says Mascherano. “He’s [Arsene Wenger] got them further.”

He is as quick to defend Arsenal’s Alexis Sanchez, one of many excellent players who perhaps was not quite himself at Barcelona, unable to adapt as Mascherano did, and finding his best form consistently only in his final season, but in whom Mascherano sees a touch of Luis Suarez.

“Alexis is a fighter who never gives up a ball for lost. Regardless of how well he plays, he always gives everything. That’s fundamental: he plays a huge role for them, transcendental. His aggression and attitude is infectious.

“Arsenal have always competed, consistently – even [back] when each year they lost important players and had to rebuild. In the last two seasons they’ve raised their competitive level.

The problem for Arsenal is that if Barcelona have occasionally looked vulnerable lately – difficult games interspersed with some mind-bendingly brilliant ones – Mascherano underlines the “competitiveness” that has seen them keep winning: they have gone 31 games unbeaten.

A treble has not blunted their hunger. As the Atletico Madrid manager, Diego Simeone, said even the front three do not seem to have much ego and that is rare.

“It’s not normal, and that’s why this team’s special,” says Mascherano.

“After winning so much this team goes on trying to feed itself. There are 25 of us and we don’t all think the same, we have different characters. But when you walk together everything’s easier.” Guardian Service