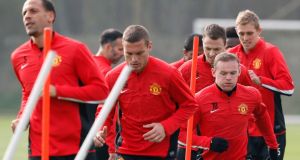 Alexander Buttner, Manchester United’s reserve left-back, could be found on the training pitches inflicting on Shinji Kagawa the kind of public ordeal no professional footballer ever wants to suffer: the nutmeg.

Buttner enjoyed his victory, with the TV cameras rolling and an audience of the world’s media, but there was still the suspicion this might be as good as it gets for the man assigned to Arjen Robben tonight.

Buttner versus Robben certainly has a look of mismatch about it, in keeping with the public perception about United’s quarter-final against Bayern Munich. Patrice Evra is suspended while Rafael da Silva’s thigh injury means Phil Jones will probably have the unenviable task of clinging to Franck Ribery’s coat-tails. Chris Smalling has not played since March 8th and, once again, David Moyes is having to piece together a new-look defence. All this against a side who have already wrapped up the Bundesliga in record time and amassed a goal difference of plus 146, and rising, over the last two seasons.

It is difficult to remember the last time United hosted a game of this magnitude with so little expectation outside their own circles of winning.

The latest press conference was most notable for its awkwardness when the Fox TV correspondent asked Ryan Giggs, sitting directly beside Moyes, if his intention was eventually to become the new manager, leading to a hasty interception from the club’s press officer.

A German TV crew sought out English reporters to debate Moyes’s problems. “Will Bayern score seven, eight or nine?” was the opening question.


Over-confidence
All of this tends to overlook the fact that Old Trafford, on cherished European nights, can still inspire its team. Robben, for one, realises the dangers of over-confidence. “The media and public opinion is that Manchester are not in good shape and that we’re going through to the semis. But I don’t like that at all,” he says.

Bayern are not often accused of complacency or underestimating opponents. If they were, they would not have eased to another German title before the changing of the clocks.

Instead, it is going to be a night when Moyes has to demonstrate that his tactical knowledge at the highest level is more accomplished than has been evident at other times this season.

He predicted a “little bit of caution” and, though United supporters do not traditionally like statements of that nature, the opposite would be reckless considering the importance of maintaining a realistic chance of progressing against the champions next week.


Staying alive
For now it should be about keeping the second leg alive in a way that has largely been beyond Arsenal in the last two seasons.

Bayern’s riches are such that a footballer of Thomas Muller’s distinction may still not make Pep Guardiola’s starting XI. Muller will probably be on the bench even though Thiago Alcantara, the player Moyes decided against signing last summer, is injured. At other times Javi Martinez and Toni Kroos have not made the side. What United, with their long-standing issues in central midfield, would give for these options.

Bayern are playing with the confidence and swagger that, in short, United used to consider the norm. Guardiola’s team have lost only twice in the past year. Once was in the Champions League against Manchester City when they were already qualified from the next round. The other was Germany’s equivalent of the Community Shield.

Moyes summed it up succinctly. “I came into the Champions League as a really inexperienced manager. We have done well but now we have the ultimate test.”


Good as anyone
His team, he said optimistically, would go into the game knowing that “on our day we are as good as anyone”. What he did not explain was why there had been so few of those days. Juan Mata is ineligible, meaning Moyes will also have to draw up a new attack, already missing van Persie, and it is never really ideal when the team are relying on a 40-year old in midfield.

Giggs was sublime against Olympiakos in the last round but, at his age, there has to be the danger of being over-run.

First things first, of course, and what Moyes would give for a performance of vintage Giggs one more time. Instead it is the opposition’s wide players who boast the most obvious credentials to shape this fixture. Jones, for all his qualities, is not the nimblest full-back against fast, tricky opponents and they do not come much faster or trickier than Ribery. Buttner faces similar problems on the left. For United everything has to be planned meticulously. It is going to require their most tactically astute and defensively fine-tuned performance of the season. Twice, in fact.
Guardian Service