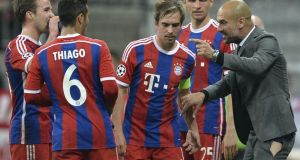 If Pep Guardiola looked unusually hungry on the touchline at the Allianz Arena on Tuesday night, this was perhaps for more than just the usual reasons. Famously, Guardiola does not eat at all on match days, instead fizzing with empty adrenaline right through to the wee hours when he might finally force down a few small cubes of cheese.

This, though, was something else. Guardiola looked frazzled, manic, even a little scary during Bayern Munich’s 6-1 defeat of a wretched Porto, offering to the world an unusually intimate glimpse of his own desire, intensity and underpants.

With good reason too. For all the resources at his disposal Bayern’s manager was under pressure. If not from the club hierarchy, then from his own self-flagellating perfectionism, and the sense of his time in Munich reaching an early fork in the road.

And yet here the great innovator was in danger of being turned over by a team soldered together from a job lot of capable South Americans.

The significance of the moment was clear, and Bayern and their manager rose to it. “GOALGASM! Pep so excited he bursts his trousers,” was the Bild headline the next day as under his manic direction the German champions produced the best display in Europe from a Guardiola team since the 2011 Champions League final.

Certainly, this was the kind of performance Pep-to-Bayern had always promised, at a moment when it really mattered. Best of all, the most significant part was not the scoreline but the style in which it was achieved.

Bayern took the field against Porto almost exactly two years to the day since Jupp Heynckes’s champions-in-waiting had thrashed Barcelona 4-0 in the same stadium playing high-speed, hard-running football across the full width of the pitch.

Against Porto Pep’s Bayern produced something similar, a performance notable as much for its urgency – even the ball boys had been told to hurl the ball back in a hurry – as its command of possession and intricate attacking angles.

The question of balance and refinement has hung over this marriage of uber-manager and uber-club since Guardiola’s appointment two summers ago. Here the players found the perfect destructive marriage of style and tempo in that golden first half. It seems safe to assume that, in Bavaria at least, the celebratory cheese never tasted so good.

It would be wrong to go overboard. Porto were miserable in Munich, a shadow of the hard-pressing force of the first leg. There is a very basic gulf in resources between these two domestic heavyweights.

Bayern had five current world champions in the team on Tuesday. Porto, meanwhile, signed six odd-job Spaniards last summer for roughly what the sale of Eliaquim Mangala brought in.

Bayern have produced sublime football under Guardiola before. Last February they won six games in a row with an aggregate score of 22-0 (their next two results were a 5-1 and a 6-1), and reeled off a 5-1, a 5-2 and a 4-1, either side of being steamrollered out of the Champions League by Real Madrid. And yet this was still a performance to celebrate. For a start Bayern were 3-1 down from the first leg, knowing that a quarter-final exit here would have qualified as a defining disaster of the early Pep years.

It is here that the rout of Porto qualifies as a Jupp-flavoured Pep-era performance. Even without his injured stars – Arjen Robben, Franck Ribéry and David Alaba – Guardiola was able to field six members of the champion team of 2013.

What happens from here will be fascinating. Guardiola will win the Bundesliga once again, but at this level the only really significant challenge, as Guardiola knows, is to win in Europe. Guardian Service