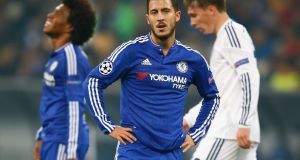 Eden Hazard hit the post for Chelsea as they were held to a goalless draw by Dynamo Kiev. Photograph: Getty

Chelsea might more normally have considered this a rather forgettable occasion. It was, after all, a goalless scrap in a far-flung capital across the continent, a match marred by spats among home supporters in the stands which reflected the political tension currently gripping Ukraine. Yet Jose Mourinho, pacing the running track beside the pitch, may actually end up pinpointing this stalemate as the moment his team’s faith and conviction were reaffirmed.

Here was evidence his methods are gaining a response. The likes of Eden Hazard and Nemanja Matic, so off-colour to date this campaign, reacted to criticism and were far more recognisable from last season against Dynamo Kiev, with the visitors the more coherent team, allying an attacking threat with the required work-rate and defensive nous.

The manager had suggested prior to kick-off that he would be content if the back-to-back collisions with Dynamo yielded four points, with that tally still realistic. If anything, he departed infuriated his team’s dominance had not yielded the victory it probably deserved.

This had not been the anticipated cautious, cagey Chelsea selection geared up for a tricky pursuit of a point in the chill of the Olympic Stadium. Rather, they had injected some urgency into the occasion early on, the recall of Hazard adding zip to their forward line with the Belgian clearly intent upon hauling his own form out of the doldrums. Hazard had been included in the nominations for the Ballon d’Or earlier in the day, a timely reminder of his attacking qualities.

His early retreats into Chelsea territory in support of Cesar Azpilicueta, confronted by Dynamo’s much coveted attacking talent Andriy Yarmolenko, were an indication that Hazard has taken on board the manager’s reminders of collective responsibility. He was bright as an attacking force, too, gliding up-field at pace with his skill typified by a drop of the shoulder and dart away from Danilo Silva down the touchline as half-time approached. By then the visitors should have led, a flurry of chances having been eked out against a rather timid Dynamo team. That the contest remained goalless was a source of frustration, with Mourinho angrily flinging away his beanie hat as he stood alone in the vast technical area.

The opportunities had been numerous. Hazard had curled a shot against the base of the far post with the game in its infancy, the culmination of a slick attacking move involving Willian, Cesc Fabregas and Diego Costa. Fabregas nodded wide and appeared to be clipped in the box by Serhiy Rybalka, the Slovenian official ignoring the claims for a penalty, while a trademark free-kick from Willian veered just wide of the far post.

Arguably the best chance was created and missed by Matic, intercepting the ball in central midfield before rampaging through and beyond four flustered Dynamo players and into the area. The Serb seemed as startled at his progress as anybody, which might have explained the awkward finish poked wide of the far post as Olexandr Shovkovskiy dived optimistically.

The locals appeared uncertain, their own ambition limited to Yarmolenko’s threat on the flank and Vitaliy Buyalskiy’s shot after Domagoj Vida’s burst down the left, with John Terry diving in to deflect the attempt behind.

Asmir Begovic denied Derlis Gonzalez at his near-post after Yarmolenkohad countered at pace, but those anxious moments were fleeting. Dynamo had lost at home to Shakhtar Donetsk last Friday, surrendering top place in the Ukrainian league in the process, with their own jitters perhaps understandable, yet this was still too accommodating for comfort.

Chelsea, after all, were supposed to be there for the kill. Instead, Rybalka, upon whom they rely heavily, was soon surrendering possession to Willian, his ensuing panic provoking a foul on the Brazilian. Willian clipped the free-kick on to the crossbar. Chelsea must have sensed vulnerability, the chance to impose themselves on Group G glaringly obvious, yet the profligacy was starting to feel damaging. Rybalka’s fine block denied Hazard from Willian’s cut-back, the Belgian bellowing his exasperation to the heavens though his wriggling runs into space were unsettling Dynamo’s players.

This was his best performance to date, some of the dynamism rekindled in his play. Chelsea will need this level to be maintained, not least at the Boleyn Ground on Saturday against an upwardly mobile West Ham. Until that derby occupies their thoughts, and having weathered some late anxiety, they should consider this a point well earned.