Celtic aiming to make the most of reprieve against Maribor 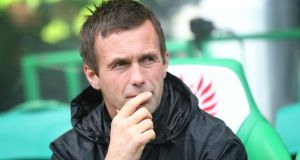 Celtic manager Ronny Delia: has a number of injury worries ahead of the tie with Maribor. Photograph: Ian MacNicol/Getty Images

The fall-out from Celtic’s Champions League qualifying tie with Legia Warsaw has been such that what happens next has been virtually forgotten: the Scottish side face Maribor in the play-off round, looking for a place in the group stage for what would be a third season in succession.

With Legia still wounded from being bundled out of the Champions League for fielding a suspended player despite administering a heavy defeat to Ronny Deila’s team over two legs, Celtic are aiming to make the most of their reprieve. Deila wants to show in Slovenia this evening that Celtic have learned from their Polish experience and improved.

For whatever it may be worth, they have scored nine goals and conceded only one in two domestic outings since the Legia tie was, apparently, settled by a 6-1 aggregate margin. Maribor have endured a mixed start to their own campaign. “Maribor are probably a similar standard but we’re two or three weeks further forward now,” said Deila’s assistant, John Collins. “It’s a step up in level from Scottish football, so we’ve got to make sure we step up our game again.”

Celtic left Glasgow without the injured Adam Matthews and James Forrest, who have joined their captain, Scott Brown, on the sidelines.

Efe Ambrose was also mistakenly left at home after Celtic wrongly believed the defender was suspended for today’s tie. The Nigerian will link up with his team-mates in the hours leading up to the game.

“We didn’t think he was ready because he got two matches but in the end it was one match,” Deila said. “So he is coming now and I am very happy because we need defenders.”

Another hamstring problem for Forrest, who has been plagued by such setbacks since bursting into the first team under Neil Lennon, should be of particular concern to the Northern Irishman’s successor.

The Ghana winger Wakaso Mubarak, who played at the World Cup, will move to Glasgow on loan from Rubin Kazan. ”He’s got pace in the wider areas and a good delivery with his left foot,” Collins said. Guardian Service