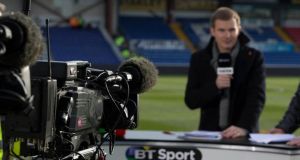 BT Sport has announced it has won the exclusive UK live broadcast rights for all Champions League and Europa League matches for three seasons from 2015/16, thanks to a €1 billion bid.

BT has agreed to pay around £299 million (€358 million) a season for the rights to all 350 matches in the two Uefa competitions each season. It is the first time a single UK broadcaster has won the exclusive live rights to all matches from the two tournaments, BT announced in a statement.

Gavin Patterson, BT chief executive, said: “I am thrilled that BT Sport will be the only place where fans can enjoy all the live action from the Uefa Champions League and Uefa Europa League. Both tournaments are world class and firm favourites with many. The live rights will give a major boost to BT Sport and give people yet another reason to take our terrific service.”

The BT channels are also showing live FA Cup games and live football from the top leagues in Germany, Italy, France and Scotland plus the FA Women’s Super League.

Away from football, there will also be rugby union and women’s tennis, plus MotoGP coverage from next year.

Patterson added: “BT Sport has got off to a strong start with customers enjoying what we have to offer. We have attracted millions of customers by giving sport back to the fans, and we can assure people who want to catch all the action, that European football will be far more accessible and affordable with BT.”

Sky feels BT paid “far in excess” of its own valuation for the rights to the European matches.

A statement from Sky read: “We bid with a clear view of what the rights are worth to us. It seems BT chose to pay far in excess of our valuation.

“There are many ways in which we can invest in our service for customers. We take a disciplined approach and there is always a level at which we will choose to focus on something else. If we thought it was worth more, we’d have paid more.

“Nothing changes until 2015 and we look forward to 18 more months of live Champions League on Sky Sports. We will now re-deploy resources and continue to bring customers the best choice of TV across our offering.”