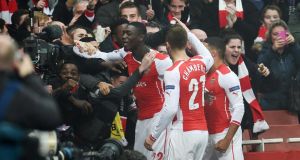 Arsène Wenger can call off the search for the dictionary, at least for now. The Arsenal manager had said that he might have to delve for the tome to reacquaint himself with the meaning of crisis. After so many years and so many crises, he joked that he had forgotten how one could be qualified.

Many Arsenal supporters felt that the club was flirting with one as they took to the field here, on the back of three dreadful results – the Champions League draw against Anderlecht, when they had led 3-0 and the Premier League losses to Swansea City and Manchester United.

But on a dank night in north London, the team were deserved and sometimes vibrant victors over Borussia Dortmund and their reward was a 15th consecutive qualification to the second stage of the Champions League. Whisper it but they are not yet out of the running to nick top spot in Group D from Dortmund.

It was an evening that will go down as the game in which Yaya Sanogo broke his scoring duck for the club on his 19th appearance and it was illuminated by the thrusting performances of Alexis Sánchez and Alex Oxlade-Chamberlain. Sánchez scored again; Oxlade-Chamberlain was only denied by the woodwork. Wenger has routinely stressed his confidence that there is something special in his squad. This was an occasion to justify his belief.

Arsenal’s start was the stuff of dreams. Sanogo’s selection had owed itself to Danny Welbeck’s knee injury and Olivier Giroud’s ineligibility, and a penny for the thoughts of Lukas Podolski and Joel Campbell might have been worth the investment. The World Cup winner and World Cup star respectively could not have taken kindly to being overlooked for a callow rookie.

Sanogo has looked almost painfully raw during his fledging and injury-scarred Arsenal career but Wenger’s faith in him has never wavered. “Sanogo will surprise you,” the manager has said. One minute and 15 seconds were on the stadium clock when the 21-year-old did just that.

There was a maverick quality to Sanogo’s hold-up work from Calum Chambers’ throw-in, as he played a bit of keepy-uppy before executing an extravagant back-heeled flick to Santi Cazorla. Sanogo span away, then he got the ball back and, suddenly, there he was, with only Roman Weidenfeller to beat.

His first touch felt heavy but with the second, Sanogo poked the ball through the goalkeeper’s legs. The delirious celebrations were underpinned by an element of collective amazement. Sanogo had looked to have been marginally offside from Cazorla’s pass but the flag stayed down. The linesman was a romantic at heart.

Arsenal had entered the tie with a little wriggle room with regard to their qualification and a big part of the mission was to restore confidence after the crash that was the defeat to Manchester United on Saturday.

The club had lapsed towards self-parody then on so many levels, not least with one of their fans throwing red wine at the United bench and there had been the memory of the collective thwack of seats flicking up and people streaming for the exits when United scored their clinching late goal. The dynamic between club and match-going fan or, more precisely, Wenger and some match-going fans has come to feel strained. This was an opportunity to reignite some positivity.

Dortmund’s travelling fans banged their drums and bellowed their anthems throughout. Their team threatened on the counter-attack, as teams can do against Arsenal, whose full-backs, as usual, resembled auxiliary wingers.

Henrikh Mkhitaryan was at the heart of Dortmund’s best moments and he was only denied an equaliser on 39 minutes by Arsenal’s third-choice goalkeeper, Emiliano Martínez. Mkhitaryan’s first touch following a direct Dortmund incision and Lukasz Piszczek’s header was perfect and the second was struck at goal from close range. Martínez diverted the effort past his near post. Dortmund made in-roads up the right flank, fizzing over a couple of dangerous crosses but Martínez was not over-worked in the first-half.

Arsenal played good football in patches and they might have taken a two-goal lead in the 10th minute, when Aaron Ramsey sprang Sanogo through the Dortmund back line. This time, Sanogo opted to jink inside, with a Cristiano Ronaldo-style flick only to run into Marcel Schmelzer. But he battled to win the ball back and, when he shot, he was denied by Matthias Ginter’s block.

Dortmund’s manager, Jürgen Klopp, had said that this engagement had represented a holiday for him; a welcome break from the nightmare that has been the Bundesliga season so far. Almost implausibly, Dortmund languish third from bottom, despite regularly playing decent football. Klopp must be an angry tourist. He roared at the fourth official and he berated his players when they erred.

Dortmund had been poor for the opening 15 minutes before working their way back into the game but they were lax again at the beginning of the second period. With the onus on them, Klopp’s team pressed onto the front foot but Arsenal, and Sánchez in particular, simply revelled in picking them off on the counter.

Sánchez barrelled through to extend Weidenfeller with a fierce, low drive while Oxlade-Chamberlain, on the occasion of his 100th appearance for the club, hit a marvellous looping shot from Sánchez’s pass that rattled the crossbar. Weidenfeller was beaten.

The goalkeeper truly was moments later. From Cazorla’s pass, Sánchez performed what is fast becoming his trademark, a quicksilver dart inside his marker to open up the shooting chance at the far corner. Not unusually, the bend on the right-footed shot from 20 yards was beautifully judged and Sánchez had his 13th goal for Arsenal. Wenger was out of his seat, fists pumping and smiling broadly. It was a night for him to enjoy, down to the detail of Martínez’s stunning late block from the substitute, Adrian Ramos.