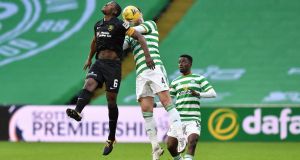 Boss Neil Lennon, assistant John Kennedy and 13 first-team players were still self-isolating as close contacts of the injured Christopher Jullien, who was confirmed to have contracted Covid-19 after returning from a training camp in Dubai.

Chief executive Peter Lawwell admitted the trip was “a mistake” and apologised to the Celtic fans in the wake of the disappointing 1-1 draw against Hibernian last Monday night.

First-team coach Gavin Strachan was again in charge of a cobbled-together Celtic team but two more points were dropped in the Scottish Premiership title race against a keen Livi side, who went into the game with eight straight wins.

The champions are 20 points behind Rangers with two games in hand, although the Light Blues quickly get the chance of another victory when they travel to Motherwell on Sunday.

Lennon, Kennedy and the rest of the self-isolating Hoops will return over the next couple of days and prepare for a rematch against Livingston in West Lothian on Wednesday night, but the quest for 10 in a row appeared to move further away.

Before the game boss David Martindale, who replaced Jason Holt with Steve Lawson, had claimed Livi would be going for all three points and they certainly started with that intention.

During an impressive opening, defender Jon Guthrie missed the target with a hooked shot from distance.

The Hoops, with Nir Bitton and Anthony Ralston back and with midfielder Tom Rogic furthest forward in the absence of four recognised strikers, were initially sporadic in their attacks.

In the 16th minute captain Callum McGregor flashed a drive from the edge of the box a yard over the bar.

Five minutes later, the energetic Jeremie Frimpong pounced on a loose ball inside the box and fired a drive straight at Livi keeper Max Stryjek at his near post then hit the rebound over the bar but it signalled Celtic’s growing confidence.

At the other end, after Ralston was booked for wiping out Livi midfielder Craig Sibbald in a tackle, Josh Mullin’s free-kick from 15 yards escaped Conor Hazard’s left-hand post.

Hazard, however, remained all-but untested even though Scott Robinson’s powerful drive from 20 yards after the break had the keeper glad to see the ball flash just wide.

Moments later, Robinson failed to connect properly in front of goal when Scott Pittman headed back.

Celtic raced up the park and attacker Mikey Johnston had a shot blocked by Pittman.

The game opened up further and in the 68th minute former Celtic player Efe Ambrose headed a Mullin corner well over the bar.

In the 81st minute Mullin’s shot from 14 yards was tipped on to the bar by Hazard and over for yet another fruitless corner.

Then Hoops substitute Armstrong Oko-Flex, on for Rogic, failed to connect with a Ralston cross just six yards out and ultimately both goals remained intact.

The two sides meet again on Wednesday and the Hoops should be close to full strength again but another test on the artificial pitch at the Tony Macaroni Arena is assured.