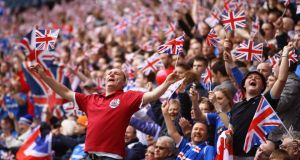 The Rangers board have confirmed they hope to launch a £4million share issue as the cash-strapped club seeks fresh investment.

Chief executive Graham Wallace admitted in his controversial business review released three-and-a-half months ago that the Ibrox outfit may turn to existing shareholders to help meet the shortfall in their revenue stream.

That came after it was revealed the club had burned through almost £70million in the 18 months since it was reformed following liquidation.

Now the Light Blues’ directors have confirmed they are looking to raise fresh investment from institutional investors such as Blue Pitch Holdings and Margarita Holdings.

In a statement released to the Stock Exchange, the club said: “Further to the announcement of 25 April 2014, the Board of Rangers announces that the Company is considering a possible equity issue in which all existing shareholders would be eligible to participate.

“Support is being sought from institutional investors to underwrite the possible equity issue. Discussions are ongoing and there can be no certainty of the outcome of these discussions.

“In line with the exemption to the European Union Prospectus Directive the possible equity issue would be for not more than an aggregate 5million euros (£4million) and would avoid the costs of preparing a prospectus.”

The crisis-hit Ibrox club’s financial plight has been put in even greater danger following the decision made by swathes of angry supporters to hold back from renewing their season tickets.

The latest update from the club revealed only about half of last season’s 34,000 tickets had been renewed. Earlier this year, the League One champions were forced to take a £1.5million loan out from football club chairman Sandy Easdale and wealthy supporter George Letham to avert another financial disaster.

But their new share issue will not open the door to former director Dave King. The South African-based businessman lost £20million when the oldco club went under but he does not own shares in the newco side.

However, the board must seek the authority to issue shares to selected investors, after losing a special resolution at December’s annual general meeting, but will not stop them from going ahead with the share issue. The club statement added:

“The Company does not currently have shareholder authority to issue shares on a non pre-emptive basis and authority from shareholders to do so, which would allow placements of shares with institutional investors, will be sought at the Company’s AGM later this year, in line with the Company’s stated strategy.”

1 Golf in Level 5 Covid restrictions: Clubs still waiting to hear if they can remain open
2 Hugo Keenan could start in changed Ireland team against Italy
3 Man United’s latest Parisian party more impressive than heist of 2019
4 Gordon D’Arcy: Ireland don’t need to do a Finn Russell on it
5 Underage and minor GAA could be stopped under Level 5 Covid-19 restrictions
Real news has value SUBSCRIBE
Crossword Get access to over 6,000 interactive crosswords