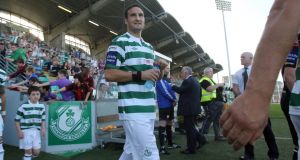 Eamon Zayed of Shamrock Rovers is back from international duty with Libya for tonight’s FAI Cup quarter-final against St Patrick’s Athletic. Photograph: Inpho

St Patrick’s Athletic manager Liam Buckley has dismissed the suggestion that tonight’s Ford-sponsored FAI Cup quarter-final against Shamrock Rovers is a more important game for the visitors than the St Patrick’s because of their respective league positions.

“It’s no bigger for them than it is for us,” he said yesterday. “We’ll be desperate, in a sporting sense, to win it; if we do we’ll be two games away from lifting the cup so the lads will be up for it, I have no doubt . . . there won’t be any need for motivational speeches or any of that. We’ll be bursting our nuts to get back to the Aviva after the disappointment of last year.”

The league leaders Shamrock Rovers have Stephen Maher out for the rest of the season with a broken leg while Trevor Croly must work without Derek Foran and Mark Quigley both of whom are suspended.

The visitors have Eamon Zayed back from international duty, however, while Karl Sheppard may have recovered sufficiently from an abdominal muscle tear to feature.

Shelbourne battle
Shelbourne face the task of stopping Stephen Kenny’s Dundalk in the other Dublin game of the night and Johnny McDonnell is relishing the idea of a big cup night given his side’s ongoing battle against relegation from the Premier Division.

“I think there are going to be a lot of twists and turns in the league,” he says, “at the top and the bottom, but this one is a good match for us to play.

“We’re positive going into the game, we really are. If we play to our maximum in any game we’ll have a chance, and I mean that . . . and it’s not as if we lost the last one against them by a big margin or anything”

Absentees
The Dubliners went down just 2-1 in that league game around a month ago but they have a longer list of absentees tonight including the likes of Paul Crowley, Brian Shorthall and Mark Leech.

On the positive side, McDonnell is upbeat about the prospect of Robert Bayly being fit again after his return a couple of weeks ago.

“I think Bayly coming back in to the side will help us because when we made the substitution in the first half against Rovers recently, he came on and held the ball well, made the difference, changed the game and he can open up defences.

“It’ll good to have him back as well.”