Celtic boss: ‘He’s good size, first and foremost he wants to defend and he’s good in the air’ 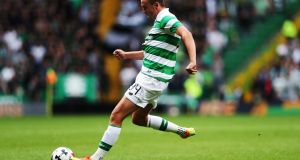 Eoghan O’Connell will continue to get his chance at the heart of the Celtic defence. Photograph: Ian MacNicol/Getty Images

Brendan Rodgers has played down his central defensive problems ahead of Celtic’s Champions League third round qualifier against Astana on Wednesday night.

Danish defender Erik Sviatchenko did not travel to Kazakhstan after picking up a groin injury last Friday, while 18-year-old Kristoffer Ajer is out with a hand issue.

The Hoops boss was already without long-term injured centre-backs Jozo Simunovic and Dedryck Boyata while new signing Kolo Toure remained in Glasgow to catch up on his fitness.

The often-criticised Efe Ambrose and 20-year-old Irishman Eoghan O’Connell, who scored against Leicester in the International Champions Cup at the weekend but who has yet to play in Europe, are the only two centre-backs available although Sweden full-back Mikael Lustig can also play there.

Despite the shortage at the centre of his backline, Rodgers remained calm.

“Both players (Ambrose and O’Connell) have worked very well, In particular, young Eoghan, I have been really impressed with him over the course of the pre-season.

“He is a good size, first and foremost he wants to defend and in the short period I have worked with him, he is good in the air.

“He has been in and around the first team for a few years now.

“He was up against tough opponents at the weekend, even though Leicester have only been back a few weeks, they come back already fit and I thought Eoghan coped with that very well, the speed of their team.

“He has a brain for football, he understands the game very well for a young player and importantly he plays the game well.

“For a young player, if they show those qualities and professionalism I never have any fears of putting him in.”

The former Liverpool manager explained that Sviatchenko had been “working well”, but he picked up a groin strain during training and will be assessed over the week to see if he can make the second leg.

“In these games it is always going to be the case of doing the very best that we could with the limited time and numbers that we have.

“But I am confident that whatever team we put out will do their very best, like we did in Saturday’s game against Leicester.

“In terms of Efe, everyone has seen, and people have seen a lot more than I have of him, he knows that if he can cut out mistakes or errors that he makes in games, then you have a very good player because physically he is very strong, very fast, good in the air.

“It’s about decision-making and simplifying the game, if he can do that he can be an asset.

“I have no qualms about who I put into the game. The strength of us will always be the team rather than the individual and the team that we put out will hopefully get the result.”

Rodgers is hoping to keep the tie alive for the return game next Wednesday, where the home fans could see Toure make his debut.

“Kolo Toure will be a lot closer next week, expect him to play some part next week,” he said.

“It is important that we go back to Celtic Park in good condition.

“We don’t need to win it tomorrow night.

“We will have the support at Celtic Park and the intensity and atmosphere that the team play under there will always make it difficult for the opponent.

“But we respect the team that we play tomorrow night.

“They will look to the home game to make the maximum impact that they can in the tie.”