Real Madrid sack Rafa Benitez after less than half a season and replace him with France great Zinedine Zidane who steps up from B team coach. Video: Reuters 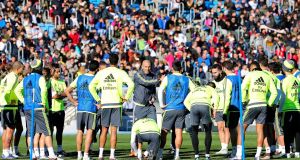 Real Madrid’s president, Florentino Perez, did not accept questions when he appeared at the Santiago Bernabeu to announce the sacking of Rafa Benitez and the appointment of Zinedine Zidaneon Monday night. Perhaps he thought there was nothing new to say. It is, after all, only six weeks since he called a press conference to denounce a “campaign” against the club and deny reports that he was contemplating making Benitez the 10th manager to leave during his presidency. Or maybe he just did not want to be asked any awkward questions, like: ‘Why?’

In March Perez called a press conference to insist angrily that he was not going to sack Ancelotti and to accuse the media of trying to “destabilise” the club. When, two months later, he announced the sacking of Ancelotti, he was asked why he was letting the Italian go; he had, after all, won the European Cup. “I don’t know,” Perez said. In November he called a virtually identical press conference with the same accusations and the same message: Benitez had his total support. Six weeks later Benitez is the former manager. No one would be asking why this time.

Some of the reasons are recurring ones, experienced by managers before Benitez, and there was something inevitable about this. Put bluntly, Benitez was the wrong manager for Madrid. At the press conference Perez spoke for a minute and a half. He dedicated two sentences to Benitez, who was absent and had not yet been informed, then moved on to Zidane. There was applause for the new guy, barely a word for the old one. Rafa who? It was as if Benitez had never happened at all. In truth, there were few good memories.

It is 13 days since Perez denied that he would sack his manager, insisting in a radio interview that Benitez was the “solution”.

In November he had said: “Benitez has only just started work; let him work. He needs time.” He was not given time but, while this sacking arrives seven months to the day since he was presented - told, as Zidane was here, “this is your home” - it has not really come early. The surprise may even be that he lasted this long and that owes more to Perez’s uncertainty about the alternatives, and an awareness of his own exposure, than a belief in Benitez. The former Liverpool manager had not even been the first choice; the job had been offered elsewhere first.

The frustration for Benitez may be that, if he was going to get sacked one day, he should at least have been sacked doing something he truly believed in. Instead he died with somebody else’s boots on. Benitez is a manager who demands control; at the Bernabeu he did not have it, until it was too late. Compromise did not save him and adopting his master’s voice was no protection. He had been brought in to carry out a restructuring not entirely of his own design and, when that proved problematic, it was he who paid for it.

The task set was a difficult one, always likely to end in failure. Benitez inherited a squad in which the heavyweights were so furious at the departure of Ancelotti as to say so publicly. They loved him whereas Benitez was the step-mother - a wicked one at that. His manner is to impose, to work and lay down rules, not to seek affection. Denis Cheryshev - whose selection in the Copa del Rey when ineligible led to Real’s expulsion - admitted that communication between players and manager was limited. Pre-season, one club captain had already clashed with him.

Benitez had been brought in to break from the Ancelotti model, but there were contradictions in the vision. Perez was convinced that Ancelotti did not work the players hard enough, that they needed a leader not a friend. With a dressing room like this one that was always likely to meet with some resistance, not least as one of Benitez’s other tasks was to tilt the team’s axis towards Gareth Bale, part of the president’s longer-term strategy.

Virtually the first thing that Benitez did was visit Bale in Wales and talk to him about a new role as a No10 - the mocking nickname, incidentally, that some players applied to Benitez who never played professionally but told professionals what to do - and that was something that Ronaldo could not fail to notice. When Benitez refused simply to say “yes” when asked if Ronaldo was the best player he had ever coached, it should not have mattered but it did.

Players saw the manager’s weakness, an authoritarian with no authority. The compromise was not comfortable and ultimately it did not help. The results were poor and performances worse. Madrid have not produced 90 minutes of good football against a decent team all year; Benitez was defensive about accusations that he was defensive but in truth the charge was simpler than that: his team was just not very good. They were not even good at the things his teams are supposed to be good at.

Benitez lost the clasico 4-0 with a line-up that had been suggested to him. If he thought that would bring him safety, he was ultimately wrong. Short-term survival could not last long term, although momentarily Benitez hoped it might have strengthened his hand. Afterwards the president said publicly that “of course” the coach had complete freedom to choose the players he wanted. As it turned out, the “so long as they’re the right ones” went without saying - publicly, at least.

James Rodriguez was a particular point of tension between president and manager. The latest galactico, he was, like Bale, the future. But Benitez was not convinced. Against Valencia on Sunday night neither Rodriguez nor Isco played a single minute and that may have been as significant as the 2-2 draw. The day before Benitez seemed belatedly to decide that he might as well do it his way, when he announced that the “problem” was the attacking characteristic of the squad.

The message had changed: the week before he had parroted the president’s conspiratorial line to insist that there was a campaign against him, Perez and the club; now the analysis focused on the flaws sought on the inside. Benitez said he was looking for “balance,” just as Ancelotti had before him. In other words, this was an old problem: the president and the players. They were the problem, Benitez said. In doing so he became an even greater problem than he already was. He was no longer the solution. He never had been.

1 Ireland Slam England at the Gardens to open up Grand ambitions
2 ‘Manchester United are lucky to have you’: Klopp responds to Donegal schoolboy’s letter
3 Leinster get the job done against Ospreys
4 Iain Henderson ruled out of Ireland’s Twickenham visit
5 David Brady says he's witnessed illegal payments of GAA managers
Real news has value SUBSCRIBE
Crossword Get access to over 6,000 interactive crosswords