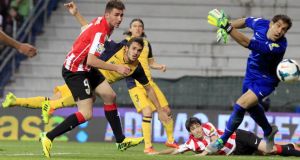 La Liga round-up: Atletico Madrid moved a step closer to an unlikely Spanish title triumph when they battled back from a goal down to secure a 2-1 win at fourth-placed Athletic Bilbao on Saturday.

The hard-fought victory at the San Mames, only the second home defeat for Bilbao this season, maintained Atletico’s one-point lead over champions Barcelona, who won 1-0 at Espanyol in the earlier kickoff thanks to a Lionel Messi penalty.

Atletico have 76 points with seven games left, equalling their tally from last season when they finished third, while Barca, who host the Madrid club in their Champions League quarter-final first leg on Tuesday, are on 75.

Looking to bounce back after defeats at home to Barca in last weekend’s ‘Clasico’ and at Sevilla on Wednesday, Real, who host Borussia Dortmund in the Champions League on Wednesday, have 73 points.

Atletico have about a fifth of the resources of wealthy Barca and Real but under inspirational coach Diego Simeone they are mounting the first genuine challenge to the dominance of Spain’s big two since Valencia won the title 10 years ago.

They fell behind in the sixth minute when Bilbao’s Iker Muniain raced clear and sent a brilliant lobbed effort over goalkeeper Thibaut Courtois into the net.

Diego Costa levelled in the 22nd, his 25th goal of the campaign, when Koke intercepted a stray pass in midfield and sent the Brazil-born forward clear to score past Gorka Iraizoz before Koke grabbed the winner 10 minutes after halftime when he nodded in a Filipe Luis centre.

Bilbao, who have 56 points and are on course for a place in Champions League qualifying, pressed hard for an equaliser and Courtois had to be at his athletic best to keep out an Aritz Aduriz header.

“They had a lot to play for like us and it was a very intense match,” Koke said in an interview with Spanish television broadcaster Canal Plus.

“Everything is hurting right now but we have two days to rest and think about the Champions League.”

Barca’s trip across town to face local rivals Espanyol, who are eighth on 40 points and still have a chance of qualifying for Europe, was potentially their stiffest test remaining before their final game of the season at home to Atletico in May.

While Gerardo Martino’s side were far from their dynamic best against a well-drilled Espanyol, the victory was a positive way to prepare for Tuesday’s game at the Nou Camp.

“We are now in a privileged position (in La Liga) and we are in charge of our own destiny,” Barca midfielder Sergio Busquets told Canal Plus.

“Let’s hope that is the case until the last game against Atletico,” added the Spain international.

Barca and Espanyol each had chances in a frenetic opening with Messi and Neymar going close for the visitors and Pizzi wasting two excellent opportunities for the home side.

The decisive moment of the match came when Espanyol full back Javi Lopez handled the ball in the area and Messi dispatched the spot kick with 13 minutes remaining, the Argentina forward’s 23rd La Liga goal of an injury-disrupted season.

Espanyol goalkeeper Kiko Casilla was shown a straight red card seven minutes from time when he sprinted out of his area and handled an attempted Messi lob.

Lopez had to replace Casilla in goal as Espanyol had used their three substitutes and did well to divert an effort from substitute Alexis Sanchez for a corner in added time.

At a rain-lashed Bernabeu, Bale played Ronaldo in to open the scoring in the 15th minute against 13th-placed Rayo and the Portugal forward set up Dani Carvajal for the second 10 minutes after the break.

Bale got his first of the night with a tap-in from Angel Di Maria’s cross in the 68th, sprinted clear to score a second two minutes later and substitute Alvaro Morata curled in a superb fifth for the home side in the 78th.

“We know that if we want to win the league we have to win all our matches,” Morata told Canal Plus.

“We have qualities and a great team and we need to all row in the same direction and give it a shot.

“We are the best club in the world and the demands are as high as they can be.”

Fifth-placed Sevilla’s six-match winning run came to an end when they lost 1-0 at Celta Vigo, leaving them six points behind Bilbao and a point ahead of Real Sociedad, who visit Osasuna on Sunday, and two ahead of Villarreal who host Elche.