Arsenal push home their advantage and move on to quarter-finals 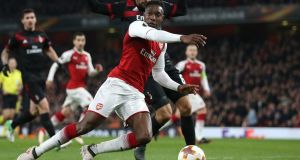 Arsenal’s Danny Welbeck is fouled and wins a penalty during the Europa League round of 16 second-leg match against AC Milan at the Emirates Stadium. Photograph: Nigel French/PA Wire

Danny Welbeck thought about it. He had felt the slightest touch from the Milan left back, Ricardo Rodríguez, inside the area and he went down. The official behind the goal thought about it some more. The seconds ticked by. Milan were unconcerned. Then, a crackle across the earpieces and there was the Swedish referee, Jonas Eriksson, pointing to the spot. Arsenal could sense their place in the Europa League quarter-finals.

Welbeck scored and Arsène Wenger, at long last, could feel his luck was in. His Arsenal team had trailed to Hakan Calhanoglu’s long-range blast and, at that point, things had become angsty. Instead, Welbeck put them back in charge. The impression that it was Arsenal’s night was reinforced when Granit Xhaka made the tie safe on 71 minutes. Again, there had been little hint of danger. The shot from outside the area looked routine for Gianluigi Donnarumma, the young hope of Italian goalkeeping. Yet he fumbled dreadfully and that was that.

On a night when the pre-match fears of another raft of no-shows among the Arsenal support were unfounded, so was the prospect of another crash from their team. Welbeck was even able to help himself to a late goal after Donnarumma had parried Aaron Ramsey’s header.

Wenger had spoken about the “psychological problem” of bringing a lead from the away leg. It meant the opposition had “nothing to lose”, he said. The balance between whether to stick or twist can be difficult to strike.

Arsenal were warned in the previous round against Östersunds, the minnows from Sweden. Three-nil up from the first leg, they fell 2-0 down at home after 23 minutes before they stabilised. The hope was it would not prove another nervous night.

This is Arsenal and there were always going to be wobbles. With 46 seconds on the clock, they suffered the sort of defensive lapse that has blighted their season. Fabio Borini crossed and, suddenly, there was Andre Silva in space. The angle was not inviting and he shot into the side-net. It was a let-off. The early scare aside, Arsenal settled the quicker and, with Héctor Bellerín pressing high and providing an outlet on the right, they got on to the front foot. The collective confidence has been fragile. Here, there were positive stirrings, even if it was difficult to relax. They created a fistful of openings.

The Milan fans had taken their seats long before kick-off – they packed the away enclosure and fired the atmosphere. But the good news from an Arsenal perspective was that the home areas were practically full. The empty seats that have pockmarked their past few matches were not a feature.

Arsenal enjoyed decent backing, even after they conceded the first goal, which had come out of nothing. Calhanoglu cut across his right-footed shot from 25 yards and he got the ball to dip and fade into the far corner. David Ospina was powerless.

Arsenal had to respond. Thanks in part to the officials, they did so. Ramsey had worked Donnarumma moments after the Calhanoglu opener and, after Welbeck’s penalty, which he converted nervelessly, Milan would be further incensed when the ball hit Calum Chambers’s hand inside the area. No penalty.

As ever, Arsenal did not convince at the back. But they could point to a clutch of shooting chances in the first half. Welbeck had put a move on Leonardo Bonucci in the 25th minute before seeing Donnarumma block at the near post while in added time, Welbeck touched back for Henrikh Mkhitaryan, who nodded wide and Jack Wilshere extended the goalkeeper with a decent hit from the fringes of the area.

Wenger had started with Wilshere, fresh from his England recall, as the No 10 in a 4-2-3-1 system – with Mesut Özil on the right – and, with Ramsey ever keen to break forward from a deeper role, Arsenal posed problems. There was an enforced change in central defence on 11 minutes when Laurent Koscielny hurt his side after an aerial challenge; on came Chambers. But Wenger’s team appeared determined to force the issue, rather than protect what they had.

Milan’s challenge in the second half was to put the penalty decision behind them, which was hard. The injustice burned. Their supporters had whistled the big-screen replays of Welbeck’s conversion during half-time.

It was a low-octane affair, with Arsenal eager to draw Milan’s sting with periods of possession. But the visitors pushed. They knew that the next goal could re-release the cat among the pigeons. Suso, who would be booked for diving, dragged a shot wide while Patrick Cutrone fluffed a volley when gloriously placed. Silva also went down in the area, looking for a penalty. He might claim it had worked for Welbeck.

Mkhitaryan and Ramsey had half-chances at the start of the second half but it was Milan that knocked on the door. The substitute, Nikola Kalinic blew a free header and Wenger had seen enough to introduce Mohamed Elneny to thicken the midfield. Donnarumma’s error, though, sucked the wind out of Milan. – Guardian service

1 ‘Manchester United are lucky to have you’: Klopp responds to Donegal schoolboy’s letter
2 Six Nations: Ireland v England all you need to know guide
3 Iain Henderson ruled out of Ireland’s Twickenham visit
4 United greats in attendance as club hero Gregg laid to rest
5 Liam Toland: Larmour can distract England while others flourish
Real news has value SUBSCRIBE
Crossword Get access to over 6,000 interactive crosswords