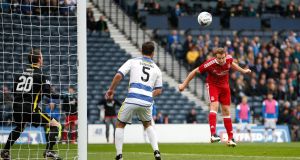 Aberdeen twice hit the bar in the first half, but Jai Quitongo saw a good chance saved at the other end and continued to threaten for the Ladbrokes Championship side after the interval.

Just as the Aberdeen fans were beginning to get restless, Rooney found space inside the box to convert his side’s first chance of the second half.

The 2014 winners relaxed and created several more opportunities before Kenny McLean netted on the rebound in the 88th minute to seal a 2-0 victory and set up a final meeting with either Celtic or Rangers.

Aberdeen made a rapid start and threatened from a flurry of set-pieces, twice coming close inside two minutes from near-post corners from James Maddison. Andrew McNeil pushed away McLean’s flick, but he was soon beaten by a Jonny Hayes header only to see it crash off the bar.

Maddison twice could not wrap his foot round the ball after being given shooting chances from training-ground set-pieces and Morton survived the early test.

The Greenock side finally created a chance of their own two minutes before half-time when McLean gave the ball away to Andy Murdoch.

The former Rangers midfielder instantly aimed a pass through the middle which Mark Reynolds failed to deal with, allowing Quitongo a run on goal. But Joe Lewis was off his line quickly to block with his trailing leg.

Aberdeen came closer in injury-time when Rooney headed Maddison’s cross off the bar, but they failed to build on the near miss after the interval.

Morton grew increasingly confident and Quitongo more influential. The former Aberdeen Under-20s player fired just over from 18 yards after running at Anthony O’Connor and then sent an overhead kick over following another strong run.

But Aberdeen were ahead moments later. Graeme Shinnie returned the ball into the box following a half-cleared free-kick, Andrew Considine won the first aerial challenge and headed across the box for Rooney. The Irishman got away from Gunning and looped his header into the corner of the net from six yards.

Aberdeen enjoyed a comfortable final 20 minutes as the game opened up for them.

Shinnie hurtled through on goal, but O’Ware did just enough as the midfielder sliced high and wide. McNeil saved from McGinn after another cross, Mark Russell blocked Rooney’s effort and Maddison volleyed wide.

The Dons’ second came after McGinn cut inside and fired an angled drive which McNeil could only parry. McLean gambled with an untracked run and converted at the back post.

1 CVC cuts Six Nations offer by half to €165m as talks continue on new deal
2 Could lack of sex force players to break the NBA’s bubble?
3 Jack Charlton era made GAA sit up and realise its greatest strength
4 Game Changers: Living beyond fear puts Alex Honnold above all others
5 Solskjaer has nothing to say on Manchester City financial fairplay ruling
Real news has value SUBSCRIBE
Crossword Get access to over 6,000 interactive crosswords