Ángel Di María on the brink of €47m move to PSG 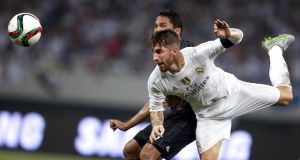 Manchester United target Sergio Ramos in action for Real Madrid against AC Milan in Shanghai yesterday, a match which Real won 10-9 on penalties. Any move by the Spanish club for United goalkeeper David de Gea depends on Ramos going in the opposite direction. Photograph: Aly Song/Reuters

Paris Saint-Germain are hopeful of finalising a deal this weekend to buy Ángel Di María from Manchester United for a fee of around £40 million (€57m). This would be a significant loss on the £59.7m record fee paid by the club to Real Madrid last summer, even with the deal potentially containing another £5 million (€7.1m) as add-ons.

Although United would not confirm that the deal is close, it is understood Ed Woodward, the executive vice-chairman, is in final negotiations and it would now be a surprise if the Argentina international did not depart the club.

Di María failed to join United’s tour of America on Saturday, with manager Louis van Gaal admitting after the 2-0 defeat to PSG in Chicago that he does not know where he is. “I don’t want to answer that but you can keep asking,” said the Dutchman. “Maybe you know where he is. I don’t know.”

Laurent Blanc, the PSG coach, added: “You know negotiations are in tandem [ongoing] and as Paris Saint-Germain [and United] are both big clubs, that can be difficult. But we feel we are close to the end.”

Told of these comments, Van Gaal said: “I don’t know because I’m not the same manager as Laurent Blanc. I don’t want to answer these questions. With Manchester United we shall announce something when it is already done and not when it isn’t done. I have said that many times. We will have to wait and see and I don’t want to interfere.”

The French champions initially offered €40m (£28.5m) for Di María but saw that swiftly rejected by United. The agreement could accelerate Van Gaal’s approach to sign Pedro from Barcelona, with reports in Spain suggesting that the Spain winger will be allowed to leave if a bid of €25m is received.

Van Gaal has admitted the uncertainty over the future of David de Gea is far from ideal for United, the goalkeeper and his suitors Real Madrid after the Spaniard was replaced at half-time of the 2-0 defeat to PSG. The manager blamed De Gea for the French club’s opening goal, though he refused to go as far as saying he was “poor” in the mix-up that caused Luke Shaw to turn the ball into his own net.

Van Gaal said: “We have a situation that is not favourable for David De Gea but neither for us and neither for the club [Real Madrid] that maybe he wants to go [to]. ”

Of Shaw’s own goal, the 63-year-old said: “Poor I cannot say but he made a mistake. That’s not poor. Everybody can make mistakes but when a goalkeeper makes a mistake it is mostly a goal and that’s the difference.”

Regarding whether De Gea will still be at the club after the transfer window closes on September 1st, he said: “We have to wait and see.”

PSG’s second goal came from Zlatan Ibrahimovic, nine minutes after Shaw’s 25th-minute own goal. Yet Van Gaal said: “I’m really satisfied about the performance. You lose, maybe that’s also good, but last year we have won everything [in pre-season] and then we lost the first match. Maybe now the sequence is a bit different but I’m not superstitious. In the first half we have created more chances than PSG and they have created only chances with personal errors and you cannot fight against personal errors.

“But I’ve also seen a lot of things good from my team so it’s more the performance than the result. I was rather satisfied.” Guardian Service