Outhalf gives kicking masterclass to down Saracens at Twickenham 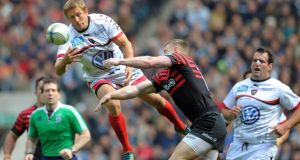 If this was Jonny Wilkinson’s last competitive game at Twickenham it was the fondest of farewells. How about this for a valedictory list of achievements: man of the match, a faultless array of seven penalties and a drop-goal, a record individual points haul in a Heineken Cup semi-final and now the prospect of captaining his club in next month’s all-French final?

It was reminiscent of his finest days, save for the incongruous sound of La Marseillaise ringing round the ground towards the end.

The 33-year-old’s outstanding performance also raised some awkward questions which will resonate across all the four home unions over the next 24 hours with the Lions squad on the point of being unveiled. There was only one English outhalf who played like a Lion in waiting and his name wasn’t Owen Farrell.

Ill-at-ease
Wilkinson’s assurance and technical accuracy, albeit behind a dominant scrum, invited uncomfortable comparisons with an increasingly ill-at-ease Farrell.

Given Wilkinson also scored all the points in the quarter-final victory over Leicester, it can hardly be argued this was a one-off.

With Toulon a decent bet to reach the Top 14 final on June 1st there remains a clash with the opening Lions game against the Barbarians in Hong Kong but Warren Gatland will know that a call to Wilkinson would generate an involuntary shiver from Perth to Cape Tribulation.

In the 74th minute with Toulon leading 18-12. Saracens were still within a score, not at their best but not yet dead. Back into the pocket slipped Wilkinson for a trademark drop-goal which he duly landed just a split second before Farrell could get to him.

Farrell was guilty of squandering Saracens’ best chance when he threw a long pass forward with Kelly Brown unmarked out on the left and his kicking out of hand was below par.

With the Toulon scrum in the ascendant and Juan Martin Fernandez Lobbe a recurring menace, an English win rarely looked likely.

Only in the third quarter was there a flicker, when Saracens strung together a couple of decent driving mauls and Danie Rossouw was sin-binned for a high tackle on the lively Mako Vunipola.

A lovely inside ball from Matt Giteau was a precious moment of skill to savour but Alexis Palisson’s chip for Delon Armitage rolled too long. Toulon, instead, gained three points when Farrell was penalised for a late hit on Palisson and their 12-6 half-time advantage was fully deserved.