Unsure whether to stretch out his career, O’Gara gives coaching hint 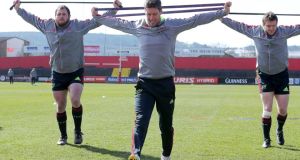 
This is a pivotal point in the fascinating life and times of Ronan O'Gara, not to mention Munster themselves perhaps, and yesterday the Heineken Cup’s all-time record points scorer revealed he was still unsure as to whether this would be his last campaign, along with an ambition to coach his native province one day.

O’Gara recently turned 36 and is in negotiations with Munster over a new one-year provincial contract which is apparently on the table. But, a la Brian O’Driscoll, O’Gara is clearly being given ample time to decide whether he wants to continue playing for another season.

“I genuinely don’t know,” he admitted as to when a decision will be made, but it wouldn’t be in the next three or four weeks. As with the Munster captain Doug Howlett, negotiations were ongoing. “In fairness the goods are there. It’s not a question of that; it’s a question of what I want to do.”

Ultimately though, he gave the strongest hint yet of a newly-revealed desire to become a coach. “I’d love to, yeah. I want to coach Munster. Of course I do because it’s my home team. There will be steps you’ve got to take before you do that so I’ve got to go to come back, is how I look at it. Because I only know one way and that’s the Munster way and to be the best possible you need to see different cultures and different teams, how they operate. That’s for another day’s chat, lads,” he concluded with a mischievous smile.

Fire still burns
As he spoke of different cultures and teams, one immediately had visions of him perhaps taking a detour to the Top 14, given his fluency in French. But it’s also abundantly evident that the fire still burns.

“Rugby has given me everything and I’m so thankful for that and I get such a buzz out of it. That’s why I want to play on. People will say ‘why doesn’t he walk with all that he’s achieved?’ But there’s no crime in playing a game you love and I just want to maximise that. But there’s a time and it’s very close when it’s time for me to go and I don’t know whether that will be this season or next season. That’s exactly where I am.”

And the fire burns this week. Reflecting on last Friday’s “hugely disappointing” result, he added: “We made it easy for them and the way we capitulated towards the end was un-Munster-like and a small bit worrying. We need to be mentally stronger and stronger in our body language going into another crucial away game.”

With that, there was a hint of the senior players reclaiming ownership of the game next Sunday. “It’s going to come from the players. I think preparation and results and plenty of things haven’t been ideal but if ever there is a time to stick together and our backs are to the wall it’s now. People are right to probably question what we’re doing and how we’re playing but we want to deliver and that will be our goal on Sunday.”

So what’s been missing and what do they need to find? “I think balance, if we can find cup rugby with taking our chances . . . We have to give ourselves the chance of winning the game as opposed to losing the game in terms of making Harlequins win the game. It’s subtle differences there.”

Nor was Munster’s undoubted Euro pedigree, all the more so when boxed into a corner, a particular comfort. “I don’t think it is, to be honest. I think it’s a new team. I think it’s a different team and a different mindset. If we can get the mindset hopefully we will get the performance. Essentially on Sunday evening it could be season over, so if that doesn’t motivate us then we’d be disappointed with what’s going on.”

Coaching is a precarious career, as had been reinforced the day before. The muted reaction to Declan Kidney’s departure – save for one generous and genuine tweet from Gordon D’Arcy – is perhaps typical of the modern professional.

Fruitful yet fractious
But O’Gara and Kidney have had a long, often fruitful yet fractious relationship dating back to when O’Gara played on the Pres Cork under-12s and culminating in what he clearly felt was the erroneous decision to leave him on the bench against Scotland before his omission from the squad.

“I was omitted from the squad a few weeks ago and that’s really really disappointing and then Deccie got his news yesterday and I’m sure he’s hugely disappointed. I know the man really well and he’s been there for my whole career so it would be remiss of me not to compliment him on what he’s achieved.

“The last few years haven’t been great but the Grand Slam has been a masterstroke, really. But that’s the standard we need to be at. We need to be contesting Grand Slams every year and the last few years we haven’t been, so in this ruthless business you get moved on for the next person and that’s what's unfortunately happened to Deccie,” he said, with genuine empathy in his voice.

“I’ve had mixed times with him,” he added candidly. “I’ve had some great times and some challenging times with him but I respect the man and that’s exactly where I stand on the whole thing. It was only when I watched the news last night and saw Cardiff (the Grand Slam) . . . that’s why you play sport. And we need to get back to that stage.

“And that’s why I’m frustrated, or challenged, at Munster at the minute, too. That doesn’t seem to be within arm’s length so we've a bit of work to do to get to those stages and that’s for all of us to get behind and get back there .”