Ulster have underachieved – it’s time they stepped up to plate 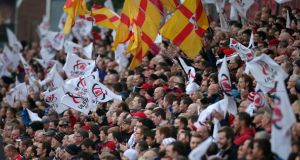 “The Ulster supporters brought great passion to the occasion and it was matched by the home team.” Photograph: Darren Kidd/Presseye

I endured some brutally physical contests at the old Ravenhill; I enjoyed them too. When Ulster met Munster in Belfast there’d be plenty of moaning as players nursed aching bodies in the aftermath, trying to find a salve for bruises on bruises.

An abiding memory is a week or two before the 2002 Heineken Cup final against the Leicester Tigers. Munster travelled to Ulster for a ‘friendly’ in preparation. They kicked the crap out of us, up and down the pitch, for 80 minutes. If the roles were reversed we would have done the same.

On another occasion in 2007, we came from 21-3 down to win 24-21. This is a selfish recollection because I had a hand, or rather a foot, in the winning try, scored by Brian Carney, who was making his Munster debut.

It was my beautifully weighted cross-kick that created the opportunity, a natural form of expression for my footballing gene that was sadly underutilised. Outhalves get too much credit for a relatively mundane skill.

On a more serious note, in my experience the old Ravenhill was as tough a place to go as any in European or domestic rugby. It could be particularly intimidating for younger players. The dressing room was tight, making it seem a little claustrophobic when full, and the noise on turning the corner, at the back of the stand to take the pitch, was deafening.

Raucous The atmosphere was raucous, facilitated by the proximity of the crowd to the playing surface. The odd comment tossed in my direction made me chuckle. The Ulster supporters brought great passion to the occasion and it was matched by the home team. You had to earn the respect of both and I really enjoyed that attitude.

I suppose it reminded me of Thomond Park. There was a tremendous amount of pride, mixed with a fierce determination to defy any visiting side and there’s no doubt that Ulster teams were plugged into the energy emanating from the stands and terraces. The atmosphere brought us tighter, fostered that siege mentality.

Curiously, given that the Munster faithful travelled in such huge numbers throughout Europe, only a handful tended to make the journey to Belfast. I don’t know the exact reason but I suspect that the four-, five- or six-hour car journey home after the match was a significant influence.

Television coverage and the fact that it was a league rather than a European fixture might have had some bearing too. It was interesting to note that it hasn’t changed much based on the number of tickets returned by Munster for this Saturday’s pivotal fixture.

Munster had a pretty good record in Belfast during my playing days but there were no easy games. Interprovincial clashes could be feral in intensity because there was so much at stake. They were invariably mini-Irish trials that went a long way to establishing a pecking order for national team selection. There were plenty of slaps given and taken.

We had an experienced core to the group, had won our fair share of trophies, and that helped us deal with the challenge. Ulster have turned round the results in this fixture in recent times and there is no doubt that their Heineken Cup quarter-final victory at Thomond Park was a massive psychological step forward.

I believed that Ulster have underachieved over the past several seasons. It may sound a bit harsh given that they lost a Heineken Cup final and also a Pro12 final but given the quality of players they would have expected to get their hands on some silverware. There was misfortune along the way, Jared Payne’s sending off against Saracens, and some issues off the pitch that led to the departures of Brian McLaughlin and David Humphreys.

To their credit they have put behind them the disappointment of the Champions Cup campaign to excel in the Pro12, particularly post-Christmas. They are a team in form, emphasised in recent victories over Connacht and Leinster, both in winning and the manner of the performances. The pressure is on to now deliver a trophy.

Saturday is a massive game for both Ulster and Munster with a potential home semi-final place on offer to the victors. Ulster have the added incentive of the final being staged at the Kingspan stadium.

Munster too suffered disappointment in Europe and their season, like Ulster’s, will be coloured by whether they can win a trophy.

Anthony Foley and Neil Doak have endured some rough passages during the season where performance didn’t match expectation and that attracted a negative slant in some of the commentary. It goes with the territory though, something of which they’re well aware.

While the primary focus for players on both sides this Saturday afternoon in Belfast is winning a vital match, the presence of Ireland coach Joe Schmidt and his management team underlines the importance of individual contributions.

There are match-ups all over the pitch to savour. Peter O’Mahony is in possession of the number six jersey for Ireland but it’s one of the shirts that Iain Henderson covets. O’Mahony has been excellent all season but he knows he can’t let that standard drop because there’s a pretty high calibre queue behind him.

Henderson is an outstanding athlete, demonstrating as much in his man-of-the-match performance against Leinster. But will his versatility count against him in trying to nail down one position in Ireland’s starting line-up? It’s fantastic to see Chris Henry back playing. Before illness, he was Ireland’s first-choice openside flanker.

Tommy O’Donnell will be measured in comparison, mentally and physically. Obviously how well the respective teams play collectively has a major bearing on individual contributions but a player still has to find a way to impress in adversity.

Look at the outhalves, Ian Keatley and an in-form Paddy Jackson; and Keith Earls’ impact weighed against the player I believe is the best winger in the country at the moment in Craig Gilroy. Donnacha Ryan’s return from injury is timely but Dan Tuohy won’t be cutting him any slack in the battle to catch Schmidt’s eye.

Experience teaches you that you can’t go bald-headed in an effort to impress to the detriment of the team ethic but opportunities arise in the context of a match to put down a marker in relation to a personal duel. Good players find a way to get that balance right.

Everyone is jostling for position in the pecking order for the national team. Forget about the Barbarians match to a point. There are four World Cup warm-up games in August and September when Schmidt will reveal his hand more clearly. Games like Saturday will have a significant bearing on his thinking.

I remember when playing Italy in the Six Nations and the following week you might be playing England, you’d have one eye on the latter match. It wasn’t about being disrespectful, just a little bit of human nature kicking in. At the Kingspan Stadium on Saturday there is no question of either team looking past the 80-minutes.

Munster would probably look at a minimum target of a bonus point and hope that the Ospreys can beat the Glasgow Warriors. Whatever your thoughts on the Champions Cup, one net benefit is that the Pro12 has been transformed into a league where there is plenty at stake right up to the last weekend. In times past, there were so many dead rubbers at this stage of the season.

Connacht travel to Zebre and the Italians are locked in battle with Treviso for the automatic Italian qualification place for next season’s Champions Cup. The western province has to try to win their two remaining matches and hope that other teams falter. Pat Lam’s side have had an excellent campaign for the most part with injuries and a lack of depth taking its toll in the final third of the season.

Leinster, who host Treviso at the RDS, know they have to finish the season strongly to copper-fasten fifth place in the league. It’s a salvage mission and one that’ll go down to the wire in Murrayfield the following week.

So much to play for; so much to look forward to.

Andrew Mackin orders up a double as Louth drink in Lory Meagher success 19:10
Carla Rowe helps set Dublin up with a chance to make it four-in-a-row 18:47
England see off stubborn Wales challenge to make Autumn Nations Cup final 18:24
Norwich denied three points as Coventry steal a point late on 17:47
Galway keep Tipperary at arm’s length to set up repeat final against Kilkenny 17:30
Crossword Get access to over 6,000 interactive crosswords